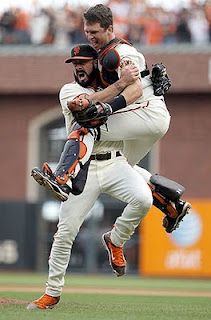 I don't mean for the title of this blog to denote a negative outcome or sour feeling, simply that spending two thirds of one's weekend in a small corner of San Francisco watching baseball that could best be described as suffocating leaves one with the sensation of having been repeatedly thrown to the ground and kicked in the jaw for good measure. And yet, on the brink of epic collapse, your @sfgiants picked themselves off the ground, put us on their backs, and led us to the Promised Land. Seven years of pain receded into the late afternoon fog, Buster Posey leaped into Brian Wilson's arms, and it was done...

I wanted it to end on Friday. We all did. Matt Cain, the Giants most reliable starter in the second half, pitching on his birthday against the reeling Padres who'd just dropped three of four to the Cubs — at home. I could barely focus at work long enough to get enough done. The boss left early, but I stuck it out to make sure I was free and clear until Sunday night. The normal traffic pockets presented themselves, but I got to the lot in time to share a beer (or three) with my season ticket partner. On the way in, I noticed two things that made me think this might not be an easy weekend: the fog was rolling over the hills from Half Moon Bay for the first time all week, and the sidewalk on Third Street that had been barricaded all season was finally open to pedestrians. It must be fascinating for-sports fans to observe the behavior of the truly mad baseball junky! Sure enough, the Cainer gave up three jacks for the first time in his career, and I ended up eating crow from the pack of Padres family faithful in Section 104. (Altogether, there were probably more Fathers Fans in front of us than at their home game at Petco the night before, but I kid...) One gent two rows in front of us flaunted his Mat Latos jersey like a flag of pride. He probably didn't expect to get an earful from Row 39, but he shouldn't have been surprised. Of course, his wife didn't do him any favors by turning around to get in our faces. This pretty much forced him to respond, flashing the "L" for loser and "two outs/sign of the Devil" with his fingers. But hey, this is all in good fun, right? Especially since there wasn't much happening on the field... That is, until Aaron Rowand hit a $12M home run. Always great to see the boys fight back, even when they don't get it done, and they did both royally on Friday night. And seeing so many at'em balls made your humble narrator feel as though a win was coming. Not on this night perhaps, but soon... 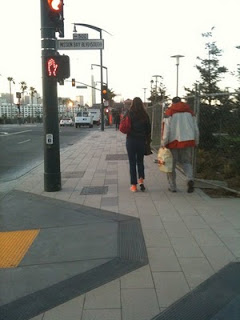 Saturday was going to be a long day before it even started, but a fun day nonetheless. I'd picked up tickets to see Arcade Fire at the Greek Theatre that night, right around the time I gave up on the Giants for the second time this season — in other words, the middle of August. At 6.5 back, I figured these games would be meaningless. And if they were meaningful, I didn't think I could take it. Then, alluvasudden, the Padres lost 10 in a row, and I found myself in an indie rock conundrum: In order to go to Saturday night's game, do I trade my Saturday AF tickets for the Sunday show they announced shortly after the first sold out? What do I do if the Giants blow it all on the final day of the year? I'll never make it to the show. I'll drive my car off Pier 32. I'll strap myself in and float to the bottom because I can't take it anymore... So, of course, Fox picked up the Saturday game, moved it to 1:10, and I was safe at home... sort of. Barry Zito, you see, had other plans. My fellow Trojan came with absolutely nothing in the biggest game of his Giants career, and even a stirring rally couldn't dig the team out of his hole. He was out of the postseason rotation long before Bruce Bochy took the game — and the ball — out of his hands. Jose Guillen had one last chance to take Zitti off the hook, but he couldn't wait around long enough to give Darren Ford a chance to stretch his legs. Whatever, right? Get 'em tomorrow. Only now, there's not much choice... Btw, the show was excellent. I've seen them twice at the same venue and both shows were unique and emotionally dynamic. On the suggestion of my show companion, we had dinner at Marlowe prior to hopping the pond. Certainly coming back here to celebrate a win or two — or three... 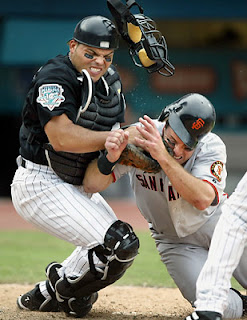 My friends made breakfast at their place in Mountain View before we carpooled up and spent some quality time on the Public House patio with @MUrbanCSN and his parade of special guests including Rich Aurilia, Bruce Jenkins, and Chris Lincecum. (I'm a name-dropping fiend!) Btw, Richie was on deck when J.T. Snow was thrown out at home by Jeff freaking Conine and Pudge Rodriguez did his dance of joy. Yep, seven years. Still stings... Anyway, the point is, it was a good morning, with a good vibe, and I was honestly amazed by the crowd. They all had that same glow, like they knew something good was coming, and I was struck by how atypical that is for Giants fans. But somewhere around the time Jonathan "Dirty" Sanchez was burning around second on his way to a stand-up triple, I started to get that look myself. How great for that kid to defy his lesser angels and bring a wave of confidence to the mound that fed the rest of the team. How great for Freddy Sanchez and Aubrey Huff to be part of the victory that finally puts them in the postseason? How great for San Francisco? How great for the fans? I haven't seen the video yet, but I was probably a hot mess in the ninth, curled up in the fetal position while Weezy blew through the Dads like a bunch of kids and Pablo Sandoval pumped his fists after every out like a fan who'd snuck onto the field in full uniform. 1-2-3. Game over. Party time. The Victory Lap was quintessential 2010. I don't care who suggested it (Bochy) or who led the charge (Panda). The spontaneity was what made it beautiful. After all, we've been playing with house money all year. If this team suddenly got predictable, I'd be worried.

> Look for my blogging to pick up as we approach Thursday's NLDS opener against the hated Braves at the Cove, for the simple reason that I can't keep all of my myriad thoughts locked under my dome piece long enough for them to subside. You can expect quick hits on 2010 Team Awards and full recaps on game days. And, as always, I'll be tweeting up a storm as @ArcadeDreams. Follow me, or don't follow me. Either way, I'll keep doing it to calm my nerves.