Give Me Liberty or Give Me Baseball 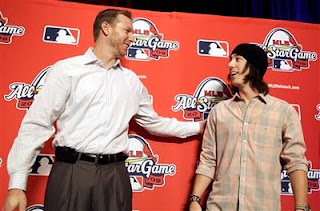 Yeah, I know. We've been hearing it all week: The Giants have no chance against the two-time defending NL Champion Phillies... Well you know what? I'm not a talking head on the MLB Network. I'm a Giants fan, and I love our little Teflon Team. As such, I know we've got slightly more than a chance in Hades. So here's how I see the NLCS playing out if we're gonna make it to the Classic:

Game 1
One of the Cy Young aces is getting lit up tonight. As a Giants fan, obviously I hope it's Doc Halladay. The pundits and prognosticators are predicting a 1-0 duel in South Philly, but any fan knows baseball exists to thwart expectation. So I'm gonna go out on the limb, leap before I look, and say the bats are gonna come alive and pepper the short porches to support another stout performance from Big Time Timmy Jim. Los Gigantes prevail 7-2. Look for an early wake up call from the Huff Daddy and his Rally Thong.

Game 2
Absolutely crucial. You've got what you wanted, a guaranteed split, but you can't let up now. Dirty Sanchez has to come out and put his foot square in the Adam's Apple of every phan in the Bank. He has to be electric, because they're gonna come out swinging like their postseason life depends on it. Be calm, be focused, be collected, and most importantly, keep the ball down. Dirty will make it through six strong with a high pitch count, and the bullpen will bend but not break. The G's have shown no difficulty in getting to Little Roy, so I'm calling a 5-3 win. Up 2-0 coming home...

Game 3
This being the 2010 Giants, there has to be a little torture involved. I admit, I'm gonna play off the 2002 NLCS a bit and say this is where someone spills the beer bong. Matt Cain is going to come out just as strong as he did against the Braves, pitching through seven, giving up a pair of runs. But the bats will suddenly come up limp in the October heat of China Basin. Shotgun has long been our hardest luck starter — only recently eclipsed by Zito in terms of paltry run support — and he'll watch a familiar scene play out as the bullpen holds but the offense can't produce in clutch situations against lefty Cole Hamels. Phils win 3-1 and take back the Mo.

Game 4
Madison Bumgarner became a man against the Braves. In this game, he becomes a legend. The sidewinding lefty, who at times this season has reminded me of a young Randy Johnson, finally got his first home win against the D'Backs in the final homestand at the Cove. This is a very important note. It got that gorilla off his back, which will give him the confidence he needs to follow Dirty's lead and shut down Philly's lefty boppers. Charlie Manuel will get greedy and throw Halladay out there on short rest after an early exit in Game 1. The Giants will scratch out a few runs, Weezy will load the bases with one out in the 9th and get a double play to end a 3-2 Giants victory.

Game 5
Here's the deal: We can't go back to Philly. We have to close this out at home. Game 6's and 7's just don't agree with us. And in this scenario, we'll get a dream matchup: Timmy vs. Oswalt. Lincecum is undefeated in his career against Little Roy, and I don't forsee that changing with a chance to close out the series in front of the orange-clad faithful. Buster Posey hits the go-ahead homer in the fourth, and Timmy cruises through 8. Weezy comes in and cleans up in the ninth. Giants win 4-1. Game over. Series over. We chill at home for a week and wait for another Game 1.

Optimistic? Most definitely. Ridiculous? Not really. Possible? Por supuesto. After all, this is baseball,  this is the Giants, this is your life. And it's ending one inning at a time...

Enjoy the ballgame.
Posted by Butch Husky at 11:36 AM