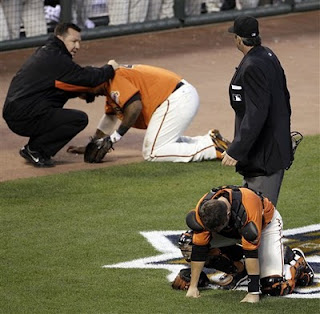 We should be up 2-0. That much is a given. But it's pointless to play the blame game. I took a day to absorb the loss and internalize all of my feelings, and of all people, F.P. summed it up on the postgame Sports Phone Friday night: You give me Brian Wilson with the lead and Buster Posey with one out and the bases juiced, and I say, "Thank you very much, may I please have another?" The loss was not unfortunate, nor was it undeserved, nor was it entirely unexpected. What was unfortunate was Matt Cain watching another stout start turned into a workout by accidental bullpen bowel movements. What was undeserved was the heat that Wilson and Posey took despite a season of top flight performance. What was unexpected was that we had this chance at all. We knew it would not be easy. For this team, it seemingly never is. Yes, they've rattled off a few 9-2 and 11-3 victories, but for the most part, they play sphincter-tightening nail-biters. They torture us by snatching defeat from the gaping jaws of victory, and then resurrect themselves like the Phoenix the very next day. They are the Teflon Team. They are our worst nightmare. We root root root for them to the bitter end, though we know the end will always be bitter, never sweet, not so long as this dreaded cloud hangs over our beautiful ballpark like a foggy shroud. What did we do? We tolerated the circus, but we were not alone. The gods must forgive us, or they must be appeased. Shall we sacrifice an order of garlic fries to the demons of McCovey Cove? Maybe a Cha-Cha Bowl would do the trick... It's funny how well 2002 prepared us for moments like this. I was watching Ken Burns' The Tenth Inning the other night while blowing off three days of NO GIANTS BASEBALL! Barry Bonds is obviously the centerpiece, and they focus on the '02 Series. Who wouldn't? If I were an Angels fan, that would be a seminal moment in my life. For us, it's a seminal moment in our downward spiral to collective insanity. But I was kinda surprised by how little it affected me to watch the whole massacre replayed like a WWII news reel. I was just as surprised by my calm and sober demeanor while watching Game 2 of this NLDS play out before my eyes. Have I finally internalized our Left Coast Curse to the point that any loss is insignificant when compared to the crippling horror of Game 6 in '02? If so, I suppose it's just a natural defense mechanism, preventing me from dying of an early heart attack, allowing me a few more years to see if we can outlive the sins that put us in this predicament.

> I'm a zero waste kinda guy. That's why it pisses me off to see starts like Cain's thrown to the wolves. It's also why I'm particularly bummed for Pat Burrell. Dude lit the house on fire with his first-inning jack, throwing up a three spot behind Shotgun to get the game started. I think it's safe to say most of the 44K in attendance felt just like I did: It's all good. We got this. Well, you know what they say about the best laid plans and all that jazz...

> If you want to b lame someone, why not Sergio Romo, who came in amped up and left without retiring a single batter, setting Weezy up for the eventual fail. I don't often like to single guys out in the 'Pen, but that was not, as they say, getting it done in crunch time...

> Some quick keys to today's game: The bats have to step up early and often. Yes, I know, I say this every game, but that doesn't make it any less true, especially with Dirty Sanchez on the mound. Dude needs the love or he loses focus. We've also gotta play tight D behind him. I don't want to see any "Olé!" out there. Just good, clean baseball. My fearless prediction: Giants 4-3.

Gotta get back to my pasta sauce. Don't want it to stick. Enjoy the ballgame...
Posted by Butch Husky at 12:19 PM