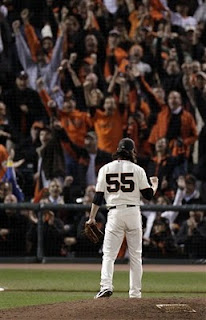 Yes, he was out. Everybody in the house knew it without the benefit of the helpful HDTVs replaying Buster's attempted thievery all over the yard. But guess what? Conrad misplayed the throw and tagged high. He got what he deserved, and so did the Braves. And this is all beside the point that the Fightin' Bobby Coxes did absolutely nothing to make an impact on this game with their bats. Big Time Timmy Jim absolutely owned those guys last night, throwing sliders in 3-2 counts, collecting an astounding 31 swings and misses, and giving the 43,965 in attendance a feeling of cool, collected inevitability. As much as any of us would normally have been overcome by sheer nervous tension given the situation, we watched in stunned amazement as our 5-10, 170-pound hero made mincemeat out of Jason Heyward and the rest of "America's Team" in the biggest start of his career and the biggest Giants game since J.T. collided with Pudge. I'd be willing to wager my heart rate reached its peak last night just after Omar Infante led off the game with a double to left center and Timmy started Heyward off with a pair of balls way out of the zone. Then, Buster Posey did what he does best: He picked the perfect time to go out there and remind his ace that this is just another game. And you know what? My heart barely skipped a beat the rest of the night, and Timmy looked like he barely broke a sweat. I can safely say I've never seen pitching dominance like that. Not in person, and definitely not in the postseason. That was picking the team up, putting them on your shoulders, and shouting "Follow me, boys!" without so much as saying a word. When Rags told Romo to take off his jacket and go warm up in the 8th, Serg asked himself, "Why?" When Weezy went out to get loose in the 8th, and again in the 9th, we were all asking ourselves the same thing. Granted, you want to keep Timmy fresh for a possibly critical Game 4 start on short rest, but sometimes we forget this kid has that bulldog nature and a Gumby body. He could throw 150 pitches and come out the next day ready for some long toss. No ice necessary. There's a reason they call him "The Freak", and this is it. He does what he does, day in and day out, and when he's done, you look back and go, "What the f*** just happened?" Only this time, he left us all wondering if we'd just entered the Twilight Zone or if we were about to wake from a very pleasant dream. Smoking a joe with by bro on the portwalk afterwards, I surveyed a surreal scene of smiles and spaced-out expressions, like we'd all just smoked a big doob of Tim's preferred strand. The Lincecum Kush was awful tasty on Thursday night. Let's hope the Cain Krush is just as stony. And stop debating the call at second. He was out. Ump called him safe. Happens all the time. The Braves still had a chance to get out of the inning. But Bobby walked Panda, Ross' grounder ate up Infante's glove, and the rest, as they say, is history.

> Can't say I was terribly impressed by Freddy Sanchez's performance in his first playoff game. Four groundouts, two that killed potential rallies. I love the dude, and it's great to have him out there pickin' it at second, but we need him to produce from the two-hole on the other side of the ball, especially with Andres the fireplug hitting in front of him...

> Why Panda? Jeebus Christ, why? We love and we care and we hope and we pray and just when it seems like you're snapping out of it for real, you throw up a turd like that. Did you have any approach at all in your first AB? And what about the first-pitch GIDP? I hope that ball looked like a home run before you swung at it...

> Thankfully, not as many opposition friends and family corrupting Section 104 for this series. I imagine tickets are pretty scarce (even if your name is Jason Heyward, future ROY runner-up). That didn't stop Noah — my season ticket partner — from executing a one-man mock-chop throughout the ninth inning. He asked me to back him up, but there's no way I'm pulling that mess with a one-run lead in the middle of a playoff game. I told him to wait for the final out, but what can I say? The dude is passionate. Even had some Giants fans ragging on him to knock it off, but he just kept going like the Energizer Bunny. God bless the patience of his fiancée...

> As I mentioned on the Twitter thingie, I've decided to forgoe live tweets during playoff home games in order to give my complete attention to the field. Hope this doesn't sadden my 35 loyal followers, but sometimes, you have to do what's best for the team. Don't worry, I'll still be on timesuck.com throughout the day and most likely while watching TV broadcasts of road games. My 140-character diatribes won't be drying up anytime soon...