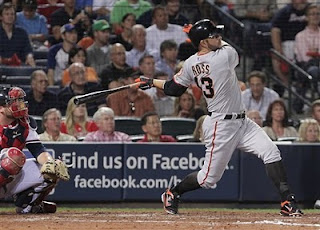 Cody Ross was an afterthought. Cody Ross was a cast-off. Cody Ross was a Giant killer. Cody Ross has never been tagged on this blog. Cody Ross was the last guy you'd ever expect to be the Giants' NLDS MVP. But he was. And that's kinda how this series went. Brooks Conrad had become a household name in Hot-lanta with an epic debut after a decade in the minors. Dude hit two grand slams in like a week and was on the verge of becoming a local god. Then he made three errors in one game, and his highlight reel got boos from a less-than-full house in his home park. That's kinda how this series went. Matt Cain and Dirty Sanchez pitched absolute gems and came away with workouts, yet Sergio Romo has an unblemished postseason record of 1-0. The Braves were a virtual MASH unit for the better part of the series, yet they fought to make every game a one-run sphincter shrinker. Los Gigantes couldn't score with one out and the bases loaded, yet they could and did score twice with a runner at first, down to their final strike. That's kinda how this series went. And now, it's on to the next one. The next round of torture. The next chance for greater glory...

> Can we get a "Hallelujah!" for Madison Bumgarner? Talk about full circle. Remember last year, and even Spring Training, when everyone was wondering, "What happened to MadBum?" What happened to that heat we've all heard about? What happened to that bulldog intensity? I hope y'all got your answer last night. Kid was off the chains good in a pressure situation on the road in front of 45,000 red foam tomahawks and an equal number of motivated hometown fans. If there were any doubts about holding my fellow Trojan Barry Zito off the roster, I think they've been answered. And then some...

> I freaking love Javier Lopez, but I love him for what he is: a LOOGY. For the uninitiated, that's a Lefty One-Out Guy. His two K's of Jason Heyward in Games 3 & 4 were the highlights of my week. Yet a postgame show does not pass my ears without a caller begging for Javy to see extended use against righthanders, even pitching full innings of setup. Of course, none of these yokels comes armed with the facts. And when I say "facts", I mean statistics: In the 2010 regular season, Javy Lopez (the pitcher) posted a .162/.250/.242 against lefties and a — wait for it — .306/.361/.405 against righties. I rest my case...

> Santiago Casilla. What the f***? Where did that come from? And where did Bochy get the brass balls to keep him out there for more than one inning? I think it's safe to say our manager has found himself in the postseason. There have been some serious head scratchers (more in a moment), but for the most part, he's rolling 7's, and he couldn't have expected Romo to wet the bed so brazenly...

> Okay, enough Bochy love. Let's indulge in a little second-guessing. It started with replacing Sandoval with Fontenot in Game 2, only to turn around and pinch hit Renteria for Fontenot an inning later. Didn't come back to haunt him because RIck Ankiel mercifully ended things before either bench was exhausted. But it surfaced again yesterday, when Bochy inexplicably pinch hit an ice cold Aaron Rowand for Fontenot against the Braves flamethrowing bullpen, knowing full well he'd have to burn another player to replace Fontenot on the infield. Enter Edgar Renteria, who made what could have been a game-changing error in the bottom of the 8th, shortly after entering the game. If Lopez hadn't woven his magic on Heyward, we could be talking about Game 5 tomorrow. My point is, it seems like Bochy's managing a 25-man roster like he would a 40-man September squad, burning through position players like Republicans spew fear and lies. So far, it hasn't bit him in the a**, but when you get away from yourself in the heat of the postseason, it's only a matter of time before it does. Just ask Dusty...

> Hats off to Bobby Cox. Dude was, is, and always will be a class act, and I was very proud to see our boys take a step back from their dance on Ted's infield to honor a man who's been managing longer than most of them have been alive. I resented the result of our '93 slugfest, so I was gratified by our LDS victories '02 and again this time around, but I'll never take a swipe at an honorable competitor. Enjoy your retirement, Bobby. Here's hoping you don't go crazy next April...