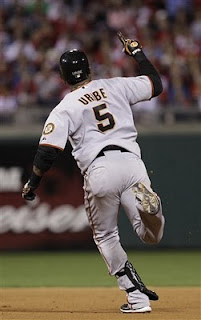 I didn't invite anyone over, didn't Facebook anybody, didn't go to the bar, didn't pull my brothers and parents together — as it probably should be — didn't answer the phone, didn't respond to texts or emails, didn't communicate with the outside world aside from screaming at ballplayers dancing on a field three thousand miles away, their images recreated on my 47" HDTV. To say that I enjoyed Game 6 of the NLCS would be a massive misstatement. It was baseball at its finest, and as such, it churned my stomach, shrank my sphincter, and chapped my throat. That in the end my team emerged victorious served only to allow me to sleep comfortably — that and a six pack of Mendocino Oatmeal Stout. But lord, what a beautiful game. Okay, I'll admit it: I guess I enjoy the torture... By the time Jonathan Sanchez was wetting the bed in the first, I was already 40 ounces to freedom and tweeting up a storm. Y'all probably coulda done without about 2/3rds of those. Sorry. But a man alone needs an outlet... And before you get to cracking wise about that, let's talk about defense. The Giants played fairly mediocre in the field over their six pack with Philly, but Chase Utley, Placido Polanco, and Jimmy Rollins played like their gloves were made of granite. Like Brooks Conrad in the 'DS, the Phillies' infield conspired against their chances to advance, and it came to a head in the third inning of Game 6. The Giants were down 2-1, having already eeked out a run off Roy Oswalt on a single from the Huff Daddy. After Huff took second on the throw, Buster hit one right to Polanco. He throws wide to Howard. Ball gets away. Huff scores. Game tied. Just like that. Such a huge play. Not just because they'd had such a hard time with Baby Roy in Game 2 and not just because it tied the game until Jazz Hands put the good guys up for good in the eighth. It's huge because it encapsulates an entire notion of this Giants postseason shared by many pundits: The Giants are lucky to be here. Well maybe we are. Maybe this game is 70% luck and 30% skill. But that's life. There's so much about this game that reminds us of ourselves, holds up a mirror to our false starts and failures, and makes us keenly aware that one day we will die. And when we die, it's alone, swinging hopelessly at a ball in the dirt as our teammates file up the tunnel to the clubhouse... Okay, no idea where that came from. But I kinda like it, so I'm not gonna delete it. Maybe add a warning... "Where were you when Weezy froze Howard?" I was on my couch, trying very hard not to show any emotion, regardless of the fact that I was alone. In the immediate aftermath, I paraded around the apartment like a screaming banshee, announcing to anyone within earshot that "I am a Giants fan, and my team is going to the World Series!" 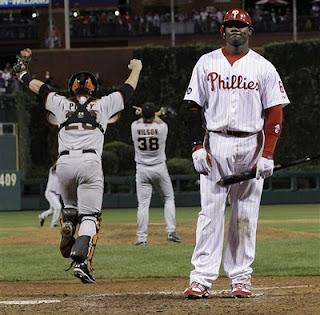 > F**king Juan U-RIBE! I've written about this more times than I like to think about, but once again, on Saturday night, I was reminded of a cold night in Seattle... Uribe went to right field that night as well. He split the gap to clear the bases, scoring more runs with one seventh-inning swing of the bat than the Giants had scored in a week. It was May 2009... Snap back to reality. It's October 2010, and Mr. Clutch is at it again. He takes the previously unhittable Ryan Madson oppo taco into the first row of the seats along the flat-planed wall in right. I'll betcha none of those obnoxious and noxious Philly phans were very hot on their bandbox of a ballpark right at that moment. Reminded me of the time Mark Sweeney put one into the right field corner outcropping at Petco. "Why'd you put that there?" I asked perplexed San Diegans around me...

> As I mentioned above, Dirty wet the bed. Philadelphia was all over him, chanting his name, standing for every 3-ball count, exploiting his one true weakness: his head. It was a smart move. A valiant move by a fan base on the verge of desperation, pulling for a team on the verge of elimination. And it worked. Dude was totally shell shocked from the minute he got out to the bump, and he never recovered. (I am not counting the bottom of the second as "calming down".) When he finally plunked Utley, I could hear Lou from the Major League Indians in the back of my mind: "I think you can go get him now." The funniest thing about the bench clearing incident was that Dirty and Utley seemed like the two players with the least interest in brawling of anyone on the field... And now, 'Chez is poised to start Game 3, again on the road, albeit in a slightly less hostile environment. But let's not kid ourselves, it's Texas. They go big there. And if the series goes longer than any of us would like, he's lined up for Game 7. Much as I love me some Dirty and will defend him against all comers, I just don't know if he has the brass for that assignment. Maybe we'll find out. Hopefully, we won't...

So where you watchin' the game tonight?
Posted by Butch Husky at 4:30 AM