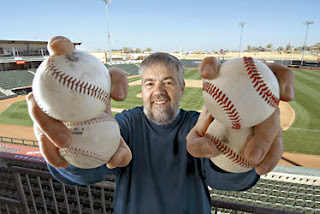 Not quite as intriguing as housewives, but much more interesting. That is, if you're into geeking out over baseball statistics and sabermetrics — which I like to call Sabesmetrics, to save on a syllable.

If you love baseball because it's the most cerebral of the mainstream American sports, because the sheer volume of numbers collected by statisticians allows for infinite analysis, because the first thing your father sat down and taught you was how to keep score, then like me, you're probably on good medication... and involved in one or more fantasy leagues during the long hot summer months.

As it stands, I can barely keep tabs on everything else in my life, and tracking the daily progress of Jose Reyes as he works his way back from a balky calf (and now a gimpy hamstring) is skating awfully close to the thin ice of not really worth my time. But I make time, not because I love the thrill of competition — I mean, really, I've only met one of the guys in my league. I do have a beef with another one of them, but it's strictly political. 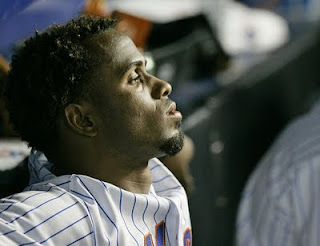 The dirty truth is baseball is the one thing in life I can't seem to ignore. Like a good drug, it knows how to keep you hooked. And with a 25-man fantasy team, I have a rooting interest in just about every game going.

I stayed away from rotisserie ball for a while. I remember trying to start a league with one other guy in junior high. Both of our teams were stacked, the stats took forever to tabulate from the back page of the USA Today sports page once a week, and we folded the league after about half a season.

Three years ago, the brother of my girlfriend at the time asks if I'd like to join his league. They had a couple guys drop out during the offseason and needed a twelfth man. I was feeling frisky, so I said, "Yes." My first draft was straight off the seat of my pants. Going into the season, I thought I'd be fighting to stay out of the cellar all year. 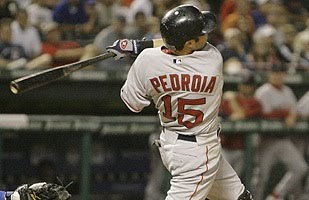 Next thing you know, thanks in no small part to a Rookie of the Year and an ROY runner-up, my team comes in third overall. I get a little payout, and now that I've had my taste, I want some more. I start to think I've got it figured out, that I know ways of analyzing data that would blow the minds of my fellow "owners," that I'm just gonna keep taking a wrecking ball to this league until I'm on top...

A ninth-place finish last year didn't sit too well, but I sucked it up. I was kinda busy at the time, you see? I went to the draft completely unprepared, barely checked my team once a week, and got all my tips from SportsCenter. That's not an excuse, just an explanation. I vowed to turn things around this year.

Of course, it would've helped if I'd made it for the first hour of the '09 draft. But I'm a busy guy, I had a meeting to chair, and sometimes even baseball has to wait. Some things are just too important.

Anyway, I gave my Top 100 to my now-ex-girlfriend's brother to draft in my stead, hoping against hope that I'd only miss a round or two. But the best laid plans and all that jazz... I get on the conference call in time to hear my dark horse pick go in the early seventh round. Absolutely horrifying because I had him pegged no earlier than the ninth round, but as soon as I jumped on the call, someone who obviously did their homework blurted out, "Pablo Sandoval, firstbaseman, catcher, San Francisco." Crushed. I almost cried.

But I recovered to learn that my Top 100 was fatally flawed by being front-loaded with outfielders. In the first six rounds, I'd drafted four OFs (Crawford, B.J. Upton, Ichiro, and Josh Hamilton), one 3B (Longoria), and one SS (Reyes, my first-round pick). I'd also drafted three Tampa Bay Rays, but I was more concerned with positional parity. Translation: I needed a starting pitcher, stat.

I asked my friend to catch me up, and as he rattled off the players from my Top 100 who were now off the table, I scanned the rolls for an SP as my turn in the seventh round approached. That was when an ugly secret about my fantasy style was exposed...

Apparently, before I joined the fun, the rest of the guys were having a laugh at some of the players I'd left off my Top 100. They asked where I had Miguel Cabrera, a Top 20 talent on most lists (well, all of them, actually). I told them I didn't have him on my draft board.

"Why not?" they asked incredulously.

"I have standards," I replied, brimming with machismo.

"What do you mean standards?"

That set everyone off laughing, and someone chimed in: "You take this too personally."

"You have to have standards," I said.

And I believe that. So no, Miguel Cabrera was nowhere near my draft board, nor was Matt Holliday — though I did own him my first season, before he dissed Matt Cain — nor Manny Ramirez nor Alex Rodriguez. (Sure, I drafted Bonds my first year as well, but that was a homer pick, and there's no rule against that or I wouldn't have been able to pick up Travis Ishikawa in the 29th round this year.)

Besides, if it's my money on the line, nobody else is gonna tell me how to run my team. In that respect, I kinda understand Al Davis, a little bit, maybe. No, he's bats**t insane. Anyway... 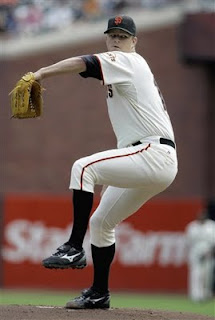 I recovered in time to draft Matty Cain in the seventh round —absolute f**ing steal in retrospect — and filled out my team best I could after that. (On a side note, I drafted Timmy last year in round seven, and it was a toss-up pick. This year, he went fourth overall in my league.)
It's been a long haul to the middle this season for the Willow Glen Nimbys: First base has been a black hole nearly all season, Reyes, Hamilton, Longoria, and Ichiro have all spent significant time nursing injuries either on the DL or off it, and our starting pitching staff has a team ERA of 3.89 but a record of 51-53 because they pitch for teams with offenses weaker than, well, the Giants. (That said, Cain's been my win machine.) We're dead last in home runs and RBI but top of the pops in stolen bases and saves. We've got 10 complete games but only one CGSO. You get the idea.

I'm holding out hope of making a few crucial moves down the stretch that might propel me into the money, but I'm not holding my breath. Since I know you're wicked interested, I'll post semi-regular updates here under the arcade. If I win anything, maybe we can go out for a beer. Maybe the President will join us...