Looking at the Arizona lineups from this series, I felt like that construction worker in Major League: “I don’t know half these f**kin’ guys.” 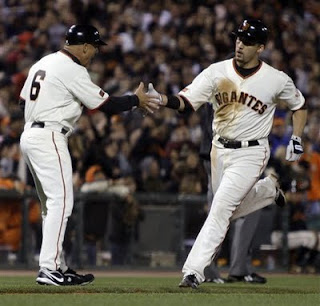 When the Giants traded for Ryan Garko, I immediately dropped Travis Ishikawa from my fantasy team. He’d been riding the pine for the Willow Glen Nimbys for the better part of the season thanks to stronger (and more consistent) performances from other first baggers on my roster. With the addition of Garko, “Hapa” would be limited to guest appearances and defensive replacements the rest of the way as Bochy looked to field the best offense he could on any given night. So I DFA’d him and didn’t think twice.

One night won’t make me regret that move, but my first thought after his eighth-inning blast ended up in the first row of the Arcade was: “Dammit. There goes seven points!” My second thought: “Thank freaking God.” I’ve said it before and I’ll say it again, but if there ever was a “must-win” game, this was it. Coming off the heartbreak of a lost weekend in Denver, this team needed to right the ship in a hurry or risk slipping into irrelevance over the final month of the season.

At the All-Star break, when I began this blog, I posted an analysis of how the Orange and Black could win the West. In that post, I posited that if they were still standing after the brutal 11-game road trip from which they just returned, the Giants would make the postseason. I’ll have to ask the peanut gallery to weigh in on what constitutes “still standing.” If four games out of a playoff spot with 37 games to go counts, then the boys have a long way to go to prove me right. I think, at the time, I considered it to mean within one or two games of the Wild Card, if not the division lead. Either way, things have not progressed as I predicted, but what else is new in baseball?

A few more notes from this one:

• Matt Cain had another stellar turn to keep the Giants in the game until the offense found its wings, but what do you expect from a pig but a grunt? In his short time in the Show, this kid’s proven that he’s tough as nails and has ice water for blood. I bet he could freeze rain with his game face.

• Scoreboard watching takes on a mighty perverse tone when the team you love to hate is playing the team you have to catch. To be honest, I’m almost hoping the Hated Ones go completely in the tank and we end up chasing them down for the Wild Card while the Rox take the division. It would be super sweet for Frank McCourt to have to return all that bunting he rented back in May when everybody was handing them the N.L. crown.

• With Brian Wilson stretched further than even he could bear, it’s no surprise that he ran out of juice and almost gave up the ghost in the ninth. Sergio Romo came on to get the final out and gave us another glimpse at the depth of this pitching staff.

As expected, Freddy Sanchez landed on the DL today with Ryan Rohlinger replacing him on the 25-man. Can’t say it’s a good thing to have your most professional hitter unavailable during the most crucial stretch of the season, but you can’t blame the guy for getting hurt, and he genuinely wants to be in there, as evidenced by his multiple public apologies to the team and all of us.

It’s also worth noting that Kevin Frandsen was not the call-up in this situation, which is surprising given that he can play every infield position but first and — at least until his comments after the Sanchez trade — was higher on the organizational ladder. What this means is anybody’s guess, but Franny has obviously burned a few bridges in the front office and may be wearing different colors come next season. As his biggest fan and most ardent supporter, I can regretfully say that this is a good thing. A change of scenery will probably do him a lot more good than the harm it does to the egos of Bellarmine-educated Giants fans everywhere.

Before his double to set up the tying run and his subsequent eighth-inning dong, Ishikawa had only one extra-base hit in his previous 68 at-bats over 31 games. Hapa must enjoy the weather at the Cove, as he’s hit a smoldering .353 over 46 games in the friendly confines.

"I didn't get all of it. I knew I hit it well; I was just kind of praying that it would either hit off the wall or get over the head of the outfielder to get the run in." - a very modest Hapa, giving all thanks and praise to Jah 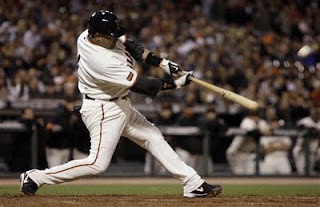 There’s no way we can keep this up.

No Freddy Sanchez, no Panda, no Big Money... well, almost. You can say all you want about the D-Backs’ Triple-A lineup, but without the three most productive hitters on the roster, the Giants’ starting nine looks about as intimidating as a stuffed animal from the Build-A-Bear Workshop out in center field.

So it was not all that surprising to watch Doug Davis thoroughly confuse and kerfuddle the offense over the first seven innings, minus one pitch to Juan “All My Hits Leave the Park” Uribe. It was even less surprising when taken into account that Davis has always kerfuddled the Giants, as has many a crafty lefty over the years. They say sometimes a pitcher or player performs better against a certain uniform. When a guy tossing 85 mph fastballs puts up 0 after 0, even against an offense as weak as this, you have to think there’s some merit to that theorem.

Thank heavens for Bengie Molina. I’m not going to go as far as others and put his eighth inning three-run jack up there with the likes of Kirk Gibson, but when you put your blinders on and look at the Giants’ 2009 campaign, I doubt you could pinpoint a bigger hit, other than Uribe’s bases-clearing double in Seattle or Pandoval’s walk-off against the Nats. (Whoever had today as the next time I’d mention the now-infamous Seattle trip just won the pool.)

I was at this one and spent the first five and a half innings pacing the Arcade in a ball of frustration. The crowd was very light, even on Italian Heritage Night — free scarf, very cool — and made me think the Spilborghs granny did more to shake the confidence of Giants fans than the team itself. But you could feel the relief erupting from the hearts of the 27K-plus in attendance when Big Money back spun a ball high and deep into the night sky.

By that time, I’d found an usher I knew and settled into a seat about fifteen rows up from the Giants bullpen. The guys sitting behind me kept passing around large game cups filled with a rum-and-Coke concoction they were whipping up in a makeshift bar under their seats. Earlier, when Monday’s goat, Justin Miller was warming up in the bullpen, they were ragging him over the gigantic L.A. tattoo he wears across his back. Miller grew up a fan of the Hated Ones, you see. But don’t blame that for his piss-poor performance in Colorado over the weekend. From an L.A. perspective, the Rockies can’t lose enough right now.

When Molina came out to pinch hit, half the crowd rose to its feet, anticipating a game-changing moment. When he went down 0-2, I remember thinking there’s no one I trust more with a two-strike count. When he made contact, we instantly started measuring things up. Did it have a chance to go? Would the left fielder have a play at the wall? Was this really happening? There was plenty of time for all of those questions to flash across our collective minds before Molina’s moon shot settled into the first row of the left field bleachers.

Of course, after the game, my thoughts kept wandering to the intentional walk Bochy made Jonathan Sanchez issue to Rusty Ryal with one on and two out in the sixth. Sanchez had pitched a strong game to that point, and was not in any serious trouble, facing one of a slew of rookies up and down the Arizona lineup. With little experience against many of the opposing hitters, I imagine the Shaman was just going for the lefty-lefty matchup, playing every card he could to win the hand. That it backfired speaks to J. Sanchez’s fragile temperament. You just can’t take a guy out of his zone that deep into a ballgame. You’re only asking for trouble.

From Extra Baggs: Building off their newly-rediscovered home field advantage, the G-Men are 12-1 in one-run games at the Cove in 2009.

"The fans, believe it or not, are a big part of this. They cheer you on and pump you up big time. I hope they understand that." - “Big Money” Molina 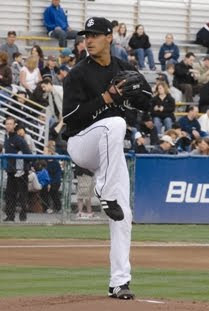 Ugh. I mean, really, what the hell else am I s’posed to say? We missed a shot to claw back within two games of the Rockies, who visit the Cove for three must-see, must-win, must-crush games over the weekend. Joe Martinez purchased his bus fare to Fresno. Still hamstrung by the health — or lack thereof — of our 2, 3, or 4 hitters. Did I mention our bats were silenced over six innings by a guy with a record of 2-8 and an ERA north of 6?

All in all, not a good night, which is why I’m glad to have spent it watching the San Jose Giants roll to a 4-0 victory over Lancaster JetHawks at Muni Stadium. Unheralded starter Paul Oseguera continued his recent run of home dominance (3-1 with a 0.58 ERA in his last four starts), collecting a career-high 15 strikeouts while tossing a three-hitter. Oseguera also endeared himself to fans by striking out the infamous Beer Batter three times, triggering long lines at the concession stands for virtually the entire contest. Meanwhile, Darren Ford led off the game for the Giants with a home run and C.J. Ziegler (a name that bears all sorts of irony for West Wing fans) added a solo shot in the fourth.

The midseason promotions of Alderson, Bumgarner, Crawford, and now Posey seem not to have slowed the Baby G-Men down in the least. With this win, they improved to 84-46 overall and tied their team record of 48 home wins, set in 1993 and matched in 2008. They pitched their Cal League-leading 11th shutout and set a single-season attendance record of 201,461. Who knew baseball was so popular in San Jose?

In the interest of full disclosure, I bit all of those Baby Giants stats — and the one below, I might add — from the gamer on sjgiants.com.

"A loss is a loss, whether you lose by one or 11.” - Aaron Rowand, though I’d be tempted to add that the one-run defeats hurt a lot more for all the what if-ing

"The club was not looking at tomorrow. We certainly had our focus out there." - Bruce Bochy, to which I’d say: “F**k off with that bulls**t!”

I’m proud of my team for the way they’ve bounced back from potential oblivion, but I’m not really surprised. They’ve been doing this all season. It’s been one heart attack after another, but more often than not (69 times, actually), our side’s come out on top. It would’ve been awful nice to get No. 70 on Thursday and pretty much erase the memory of the Denver doldrums by putting us back within two games — which is where we were when we touched down in the Mile High City.

C’est le baseball. We’ll just have to sweep the Rocks out of the Cove, and we’ve got the horses lined up to do it.
Posted by Butch Husky at 12:00 PM