Not to mention those damn airplanes. Yet someone thought this was a good spot for a ballpark... twice. 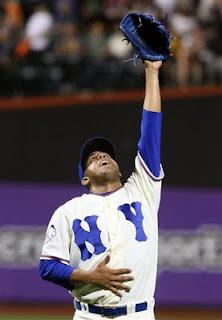 Not much to say when the game is over after one batter in the bottom of the first. I will say that Barry Zito’s second half performance continues to impress. Sure, he hung one to David Wright in the sixth, right before he got yanked, but this game was over before anyone laced up their spikes.

Quick shout out to Angel Pagan, who owns the best oxymoron of a name in professional sports.

The Giants have been shut out in eight of Zito’s 24 starts. For those with remedial math skills, that means he’s had absolutely none chance of winning in one third of his appearances, no matter how well (or poorly) he pitched.

"It's hard to ride that momentum when it's not the next day." - Barry Zito, who might have a point. The Giants have played like ass in every game after an off-day in the second half. Look it up. 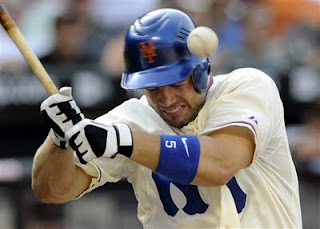 I spent the better part of this game counter-protesting some vicious teabaggers outside a Barbara Boxer book signing at Barnes and Noble, and consequently, I missed the David Wright bean ball and didn’t learn the full context of this game until the postgame show.

So, when Panda hit his jack off the second deck after Santana threw behind him, I figured that was an isolated beef. When Bengie took issue when getting plunked, I assumed it was a direct result of the Sandoval at bat. When Cain tipped his cap upon being removed, I thought he was acknowledging the strong orange and black contingent that came out for the weekend getaway — as well as half the ownership group.

Once I saw the full highlight reel, I realized that all of those incidents had a direct link to Wright lying in the dirt with a dent in his helmet. Now, I’m all for an honor code, and I understand the principle of protecting your teammates, but in the middle of a pennant race, in a close game, these kids games are a pointless exercise. S**t happens, and sometimes a pitch gets away. I know these guys are hopped up on adrenaline and Gatorade and who knows what the heck else, but maybe a little Xanax would help cooler heads prevail.

What cannot be lost on anyone here is that Matt Cain was once again on the receiving end of a tough-luck ND. The mental fortitude of this kid has yet to display any limits. He’s one cool customer out there, and I challenge anyone to find the change in his expression as he watched from the dugout as another brilliant performance went from win to workout thanks to a bullpen hiccup. It’s just another reason I have no reason to doubt his ability to compete in a tight pennant race... or postseason series. 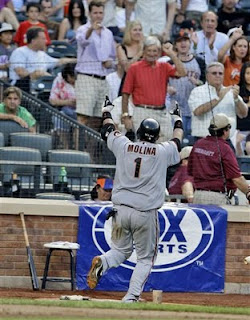 Can I get some love for Bengie Mo? The loveable if sloth-like backstop fought through doubts about his viability in the cleanup role to have a solid two weeks at the plate, culminating with three hits and a pair of RBIs in this contest — including a dramatic game-winning jack in the 10th.

I’m not saying he’s your prototypical four-hole guy, but really, if you accept that Sandoval needs to hit third to guarantee he comes up in the first inning and as many times as possible thereafter, where would YOU hit Molina? And if it weren’t cleanup, who would you put there instead? (Bear in mind, Bengie is second on the club behind Panda in dingers and ribbies, and the guy in third — Rowand — isn’t even close.) I’m eager to hear your solutions.

For as long as I can remember, the Giants have played like s**t in Saturday games on Fox. Maybe the bright lights of national TV put a bug up their collective butt. Maybe it was something to do with the quality — or lack thereof — of the Fox announcing crew, be it Joe Schmuck and Tim “Hey, did I ever mention I once caught Bob Gibson in the World Series?” McCarver or Thom “I also do Diamondback games poorly” Brenneman and Mark “Nice Guy” Grace. Maybe they just didn’t give a crap about their fans in other markets who can’t afford the MLB Extra Innings package and choose to play badly in the only games they can watch — this happened to me many a time while toiling in SoCal.

Well, they tried their best to lose with glory, but the boys chalked up a W in a Fox game — on the road no less. This prompts me to ask: What’s next? Bengie Molina takes a pitch? Pablo Sandoval eats a salad? Nate Schierholtz starts every day? Not f**king likely on all counts...

Brian Wilson blew his sixth save but stuck it out for 2 2/3 innings scoreless innings — his longest career appearance — and got the win. It was the ninth time in his career he lasted at least two innings. In those nine outings, he’s 3-1 with a 0.96 ERA.

“He threw four fastballs by me [last night], and I couldn't see them. I said, 'You know what? He might feel the same way today.' So I was just sitting on 95 [mph]. If he had thrown any other pitch, I would have been the first out of the inning." - Bengie Molina, on his home run off Francisco Rodriguez that caused Butch’s thoughts to drift to the 2002 World Series, which is (almost) never a good thing 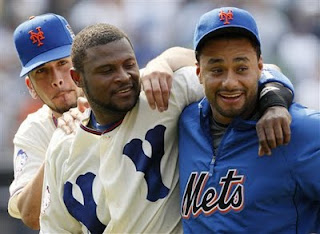 Luis Castillo didn’t beat the Giants on Sunday afternoon in Flushing. Neither did David Murphy. Fred Lewis won this game for the Mets. The only problem is the uniform he was wearing at the time.

It’s real simple: If you’re a major league ballplayer and a ball lands in your glove, it doesn’t hit the ground. Period. I don’t care if your chest explodes and a motherf**king alien pops out singing “Hello, My Baby”... You catch the f**king ball.

Why in the world this guy keeps picking up starts is beyond me. Granted, he’s one of the few guys on this team with any plate discipline, but when you have a guy like Nate Schierholtz riding your bench — a guy who just one day prior had two hits off Johan Santana batting left-handed — there is absolutely, positively no earthly reason why Fred Lewis should even sniff the starting nine except to deliver the lineup card to the umps before the game (see Monday recap).

I am so utterly sick of Bruce Bochy’s daily machinations with his starting squad that I’m about to puke on my MacBook. I don’t know what numbers he’s looking at, who’s whispering in his ear or what games he’s watching, but if another day goes by without Schierholtz in right field from the first inning on, somebody’s getting fired... at least in my head. When a team is this desperate for run support, how can you ignore a guy with Nate’s numbers and ability at the plate, on the bases and in the field in favor of trotting out washed-up vets like Randy Winn or promising but troublesome busts like Lewis.

It’s beside the point to mention that Randy so much as admitted he should be benched to Andy Baggarly and the rest of the beat reporters after a miserable performance last week. After years and years of playing for losing teams who never found themselves in contention, the man says he just wants to win. He doesn’t care about his view during the pennant race. Frankly, the way he’s been hitting, he should be watching from the pine, but that’s just, you know, my opinion, man. (Full disclosure: Yes, I saw his game-tying double. Impressive, but one hit can’t salvage a lost season.)

Sheesh, all that bitching and I still haven’t mentioned that Jonathan Sanchez deserved another win today. He’s really picked up his game on the road, and it’s a good sign for this team heading into the final seven weeks.

Did anybody else’s heart skip a beat when they saw this? According to Baggs, he’s all good. But that’s what they said about Robb Nen.

Stats of the Night

J. Sanchez has compiled a 4.04 ERA since his no-hitter on July 10th, but he’s limited opponents to a .202 batting average in that span.

"I threw a strike that was hittable instead of one that wasn't. There's really no secret to what happened." - Jeremy Affeldt, who gave up the winning hit to David Murphy 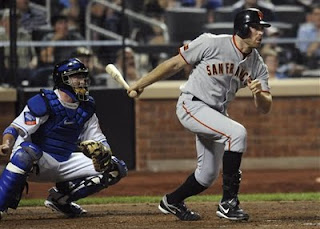 Did I mention that Jake runs like the wind, has a cannon for an arm, and hits lefties better than any other lefty on the team?

So why isn’t Jake starting?

Why is Jake coming off the bench as a pinch hitter (a role in which he’s hitting over .400) and crushing a near grand slam to bust the game open when he could have been playing the whole time?

Is some crazed shaman guiding this team? No, it’s only Bochy.

The aforementioned shaman called a team meeting before his boys took the field and asked them to forget their road record and focus on having fun and leaving a good impression. Then he went and sent Fred Lewis out with the lineup card. And before any of us could ask ourselves “Wtf?” the Giants were rolling... 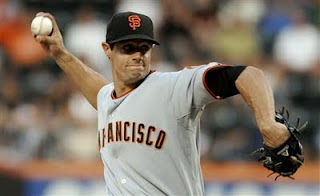 Joe Martinez won in front of a gob of friends and family, and he got to watch the last four innings taboot.

Aaron Rowand and Randy Winn had big games, which we’d like to think could bode well for these streaky hitters in the crucial days ahead.

Gino Velez continued to climb out of his super-mini-funk, and Freddy Sanchez continued his brilliance in the field and at the plate. He may be banged up, and it may not show up in the W column, but this is a better team for having him.

Aaron Rowand’s tiebreaker in the fourth was his first dong since July 2, a gap of 98 ABs.

"It's kind of a funky field." - Nate Schierholtz on the Mets’ new home, Citi Field

As I write this, the G’s just broke a 5-5 tie with the Redlegs in the top of the 10th in Cincy. At one point, they trailed 5-1 after Lincecum got lit up like he hasn’t all season, and all I was thinking was, "Just get him through the sixth or seventh so the bullpen isn’t taxed midway through the roadtrip." Then they went and scored 4 runs in one gosh darn inning. Now how about that?
Posted by Butch Husky at 7:30 PM