And they say this place is a hitter's park... 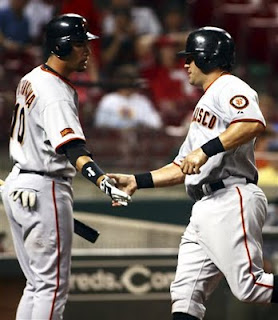 Whatever pipe our Shaman manager is smoking from, I want a hit. How else could he have had the prescience to go with Ryan “Cardinal Caveman” Garko over Travis “Hapa” Ishikawa against a righty when the former Stanford star had yet to flash any brilliance with the bat outside of a bevy of loud outs?

I have to admit, I scanned the lineup in Baggs’ pregame post with much consternation, especially over the absence of “Nasty” Nate Schierholtz, who has risen from the ranks to become the man crush of everyone who follows this team*. But when your team busts out for a season-high in hits and scores in double digits, I can understand the desire to maintain the status quo and roll the same lineup out there the next night.

Bochy even went so far as to have Fred Lewis deliver the lineup card for the second game in a row. If this streak continues, Freddy should be named honorary bench coach and get the duty every day. Maybe he’s finally found his niche on this team.

Whatever the reason, whatever the season, the G-Men have seen their bats come to life over the past two days. But right around the time Homer Bailey squeaked one down the line in the bottom of the second, I was conceding this one to the baseball gods. I’m not always happy to be proven wrong, but I’ll gladly take my lumps on this one. 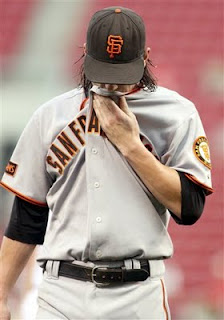 It’s growing more and more obvious that Timmy likes it cold. He grew up and went to college in dreary Washington and plays his pro ball in a city with colder summers than winters. Anytime he pitches in the humid mugginess of the Midwest or East Coast, he loses his touch, sometimes a little, sometimes a lot.

This occasion falls into the latter category. Even “The Kid” himself admitted he had nothing. That he got through six innings is a testament to his natural abilities and perseverance, and it was a boon for a bullpen that went five innings the day before and won’t see a day off for another two weeks. The Giants’ relief success stems from the dominance of the starting staff, and every time Timmy or Matty don’t go at least seven-plus, it eats up innings that we’ll need from the ‘pen down the stretch.

Lincecum made it as far as he could on Tuesday in what looked like garbage time. So it was that much more thrilling to see him picked up by the biggest comeback of the season, and on the road no less. After what happened when these two teams hooked up at the Cove, we needed this win.

Of course, they G’s came back from three runs down for the first time all season in the game that preceded that Reds series, so God knows what to expect in Wednesday’s contest.

* Thanks for jumping on the bandwagon, folks. I knew this kid would be a force the first time I saw him take BP two years ago, and I’ve said so every step of the way along his frustrating career path. I only wish I’d had this blog two years ago so I could conveniently link you to my comments. Instead, the only person who could corroborate my claims is the friend who sat with me in the bleachers that day. You out there Rypka?

There was no shortage of statistical oddities in this one:

• For only the second time in his career, Tim Lincecum walked in a run.

• Bruce “The Shaman” Bochy was ejected for the fifth time this season — and the third time in eight games.

“[A]ny time you put a new uniform on, you want to try to be Superman, I think. We're all human. We all want to do it. Sometimes you have to take a couple of steps back and relax. I'm working on it." - Ryan Garko 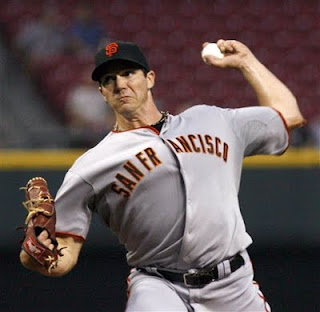 Can Barry Zito get a run? Please? I mean, for reals, this is getting ridiculous.

Over on the 50K-Watt blowtorch, someone’s saying Barry should’ve looked at strike three with the bases juiced and one out in the second. Barry didn’t go down looking. He swung, and ended up hitting into an inning-ending double play. But who can fault him for swinging? It’s not like anybody else is doing much to get him even a shred of run support.

Meanwhile, Nate Schierholtz returned from oblivion to drive in the game’s only run with his second double of the night. A cynic could say he could’ve done the same job as a pinch hitter, but the pitcher’s spot wasn’t up in that situation. The two hole was. And “Nasty” Nate was there to greet the moment with the hit of the game. Forgive my gushing, but attention must be paid. This kid is the future. And the future is now.

That said, wasn’t that knock eerily similar to the ball that Fred Lewis flat out dropped in New York on Sunday? I think Freddy had an easier play.

Props are due to Sergio Romo, who’s been born again hard.

Bochy sat Panda tonight, and it was the right move. The kid’s dragging ass at the plate lately, and it was starting to carry over into the field. When that happens, you know the slumps getting into a guy’s head. Best to give him a day on the pine to gather himself for the sphincter-tightening days ahead.

Five Giants had two-hit games to account for all 10 of the team’s hits.

"I don't think there's any rhyme or reason. I think it's coincidence." - Barry Zito on enjoying the lowest run support in the Major Leagues 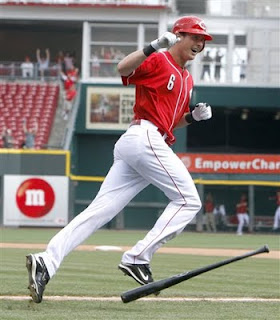 Not much to say after losses, I know, but who has the energy to break down a game in which a team scraped together 11 hits and could only plate one run... on a wild pitch?

Who has the time or the inclination to analyze the Giants’ lack of patience in the batter’s box? Their blatantly obvious ignorance of fundamentals? Their inability to deliver the clutch sacrifice fly or even so much as a butcher boy chopper to the right side with a runner at second and nobody out?

If the Giants succeed in their postseason quest, it will be on the backs of the finest pitching staff in all of baseball. (You can look it up.) We like to talk about how no one wants to face this staff — especially the front end of the rotation — in a short series.

But if the Giants are going to make any noise in October, it will be on the backs of these hitters. And two-game stretches like this will really make you cringe when you think about the pitching they’d face in a short series.

Tough-luck workout victim Matt Cain has made five starts in a row sans victory. His ERA over that stretch is 2.97. I should know. He’s the ace of my fantasy rotation.

“No question, this was one of our tougher games all year. But we have to get ready for Colorado now and put this one behind us.” - Bruce “The Shaman” Bochy 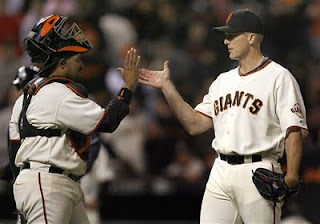 From Wikipedia, with my usual snarkiness...

Bob “Whatever happened to Bobby?” Howry was drafted by the Giants in the fifth round of the 1994 Major League Baseball Draft.

On July 31, 1997, the Chicago White Sox traded three major players to the Giants for six minor leaguers, including Howry.

Years passed, as they say, and sure enough, like a boomerang, Bob Howry returned to the Giants, signing a $2.75 million one-year contract. Until Tuesday night, he had never won a Major League game for the team that drafted him. And what a way to get your first W for the original club.

Thursday afternoon, Howry was a victim of a fate that’s haunted him all season. As soon as he worked himself out of a late-inning role with early inconsistency, he became the go-to guy in tie situations, late in the ballgame. He’s the Giants’ resident inning-eating specialist.

So it should come as no surprise that he’s clocking a 1-6 record this season. He tends to come into the game when everybody who comes to the plate is thinking, “Yabba dabba doo!,” and he throws a lot of fastballs.

But cut through all that playa hata nonsense in your head and think for a second about how cool it would be to go to the playoffs with a guy we gave up to win a division.

Tonight’s the night the real race begins. It’s a sprint to the finish, and we’re starting out two steps behind. Time for the cream to rise. Are the Giants in. Or are they out?