It’s okay, Chicken Little! You can put away the noose! The sky isn’t really falling... yet. 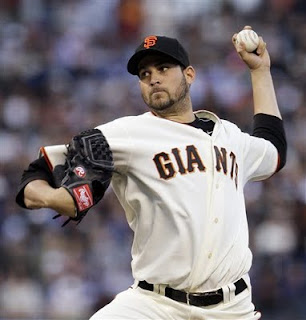 One pitch. That’s all it takes to ruin a pitcher’s day.

Jonathan Sanchez threw that pitch to Matt Kemp in the top of the fourth, and Kemp cleared the sacks. That J. Sanchez survived to pitch a stellar fifth is testament to his newfound confidence. But for one inning, it was the Sanchy we all know and try to love: teetering on the brink of a full-on physical and mental breakdown.

One inning. That’s all it takes.

To all the squakboxes who like to quack about the Giants’ lack of pop: They’ve been putting on a power display of late, and how much do they have to show for it? I love watching Ishi and Bengie go deep as much as the next guy — a bit more seeing as how they’re on my fantasy team. But if Fred Lewis — or anybody, for that matter — is on base at the time, a home run is a lot more effective.

In a bit of news that’s hard to categorize, the Hated Ones announced No. 1 starter Chad “Barbara” Billingsley will miss at least one start with a sore leggy-poo and be replaced this turn by journeyman a-hole Jeff Weaver. Here’s hoping Chad’s got some good painkillers and that he’s out for a wee bit longer than anticipated, and also that someone talks a little s**t to Weaver during Wednesday’s game.

The Dodgers’ 31-12 record against the N.L. West this season is the best intra-division mark in the Show.

"This is not the way you want to start a series but it's not desperation time. We need to relax and play our game." - Bruce Bochy, Zen Master 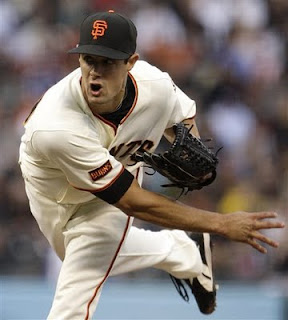 One play. That’s all it takes to turn the momentum of a game.

I’m sitting here, still thinking about it. If he’d let it go through, Velez would’ve grabbed the ball right on the bag and had an easy turn of two. Instead, he made a circus play that would’ve made it to the top of the Web Gems... had he not knuckled one to Gino, who conveniently dropped the dime. And the Boys of Summer were off and rolling again.

You have to feel for Joe Martinez. He was acting on instinct, and he made a tremendous play. But as he knows all too well, the game can be cruel. And so can Manny Ramirez. Seriously, when Casey Blake is “defending” him in the five hole, why would anyone pitch to this guy?

Speaking of ManRam... Don’t know if anyone else noticed, but there was a pretty thick cloud hanging over the Cove on Tuesday night, and it wasn’t the “marine layer”. For years, we learned to live with our own embarrassment of a left fielder because he was our embarrassment and when you strip away all the hype and the dope, he was still the greatest hitter many of us have ever seen live. We heard the Think Blue Mafia chant “Bar-roid” and “Barry Sucks” — even when Bonds wasn’t playing! They booed him, they taunted him, and through it all, we defended him because he was electric.

Btw, I have to admit, I couldn’t deal in the 7th. The mediocrity was simply too much to take. The fact that it was coming from Brandon Medders made less sense than the endless string of hits he allowed. This guy has dealt all year, but for one inning, he looked like garbage. But one inning is all it takes, sometimes.

Eugenio “Babe” Velez’s 16-game hitting streak ended with an 0-for-3, but he made the most productive of the Giants 27 outs, driving in Fred Lewis with a 3rd-inning groundout. He had one last chance to collect a knock in the 8th, but he was hit by a pitch that first bounced in the dirt. During the streak, Velez hit .420 (29-for-69) with three homers and 11 RBIs. It was the Giants' second-longest streak of the season, trailing only a 17-game run by Aaron Rowand. 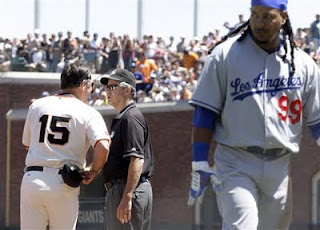 You always hear the cliché when someone’s talking about another sport: “You don’t want the refs deciding the game.” Kobe says it about basketball. Mike Nolan used to bitch about it in (American) football. And just this week, Tiger mouthed off about the officials at a golf tournament. Read that last sentence again, and bear in mind Mr. Woods won the match.

My point is, you don’t often hear that excuse in baseball. Because 99.9% of the time, umpires effectively render themselves invisible. Think about the sheer number of calls made by a four-man crew over the course of a single game. Now think about how often you actually see a call worth questioning, even after rewinding and replaying your DVR recording of the play at least fifty times at six different speeds.

That said, the umpires almost gave this one to the Hated Ones, and luckily I’m not an employee of MLB or any of its franchises, so I can say that without getting fined. On no less than three separate occasions, this crew absolutely and unequivocally blew the call. 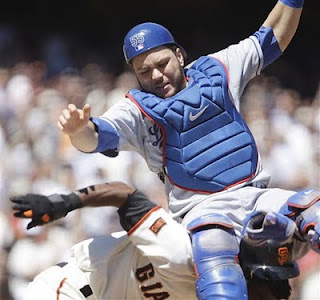 The first time, it cost the Giants a rally. The final time, it cost Tim Lincecum a complete game victory and on any given Wednesday could have cost the Giants the game. The time in between, it added insult to injury after one of the scrappier tiffs this rivalry has produced of late. It got so bad out there, the Giants had their manager ejected... twice. (That has to be a first for Ron Wotus. I’ll have the research team check it out.)

A quick note on the bench-clearing petting zoo: Russell Martin doesn’t have to prove how hard he is. He’s a Major League catcher. That should be enough. Instead, he had to wave his d**k around in Panda’s face, and Panda didn’t do nothin’ to nobody. So back off, Junior, or you’re goin’ on the list right under Casey Blake.

And now a note or two about the baseball:

Redemption, like revenge, is a dish that is best served cold, and it tasted awfully sweet when Juan Uribe lit up Guillermo Mota on an 10th inning 0-2 mistake to send everybody home googly eyed and grinning. In a lot of ways, it had to be Juan Uribe.

Looking back at this semi-disastrous homestand and taking into account the Giants’ position in the playoff race, this was a huge moment. Biggest of the season. The lead was blown, but the Giants were still alive. Still alive in the Wild Card. Still alive in the West. Brian Wilson just laid down the law with four strikeouts. If something was going to happen, it had to happen soon. As in now. 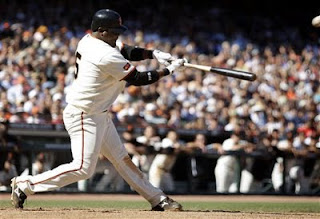 This was a must-win game before the first pitch, but it became an absolutely positively have to win or you can kiss your season goodbye kinduva game right around the time Uribe rounded third and everybody took a moment to think about what we would’ve been facing if the Hated Ones prevailed... Swept by the rivals at home, headed on a brutal 11-game trip, to the East Coast, in the dog days.

I felt these same emotions surging through my bloodstream once before this season. It was a warm May night in Seattle. Call this movie Unlikely Hero Redux.

P.S. Anybody get goose bumps when Wilson struck out Casey Blake to start the 10th? Much better revenge than plunking him. And just think, if they’d won this in nine, we would’ve missed a classic AB.

Before Freddy Sanchez’s RBI single in the fifth, the Giants had been 0-for-14 with RISP in the series. They were a whopping 1-for-18 by the end of it. 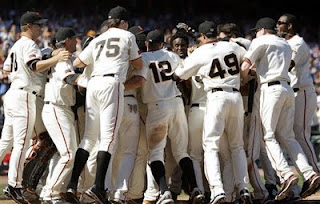 Giants pitching shut down their rivals’ offense for 22 innings over the three-game series. In the other five innings, the San Francisco staff allowed 15 runs — 13 in three innings through the first two games.

The big inning has been a Giant killer all year, and the Hated Ones are built for crooked numbers. Their lineup is solid from top to bottom, and they jump on every mistake you make and every gift you hand out.

The Giants were far too generous with their charity in the opening two games, but no one can fault their valiant performance against a 13-man squad on Wednesday. Sure, you need to score with the bases loaded and nobody out, but it’s hard to complain about some good ol’ fashioned drama as evidenced at 24 Willie Mays Plaza this week.

I could tell you guys were into it. Wanna know how? Because I still heard you cheering in the bottom of the ninth on Tuesday night: