Used to be the G-Men owned Enron Field. Good to see we're getting back to basics now that the place is named after orange juice. 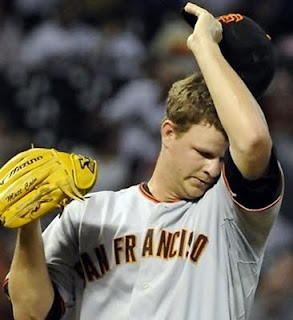 Matt Cain’s had a tough time trying to collect his unlucky 13th victory, but nobody can fault him for lack of effort. In his last two outings, he’s turned in a nine-inning shutout of the Bucs and an eight-inning gem against the ‘Stros. The first was spoiled by a non-existent offense; the second by a chip shot and a fluke. In a gimmicky park like this, the team with the most homers will generally prevail, and the home club had more of those on this particular night.

BREAKING NEWS: Eugenio Velez human after all! Of course, he also picked up a pair of hits and scored a run.

We’ve still got at least a week before Nasty Nate returns from his gruesome injury suffered while being a baddass, so the jury’s still out on what the starting outfield will look like when he does. But as much as I love the kid from San Ramon Valley High, the new-and-improved Velez is opening a lot of eyes — mine included. No clue he had this kind of talent, and there’s only so much longer we can go on expecting it not to last.

“Why not? I gave up 35,000 Big Macs already.” - Matt Cain, who gave up a dinger to Kaz Matsui that clanked off the Chick-Fil-A ad that runs along the screen on the right field foul pole, awarding free chicken sandwiches for anyone with a ticket stub from the game. Last year in St. Louis, The Great Pujols took Cain deep into the Big Mac seats. You can guess what fans got for that.

Velez’s BA stands at a blistering .439 during a 10-game hitting streak. 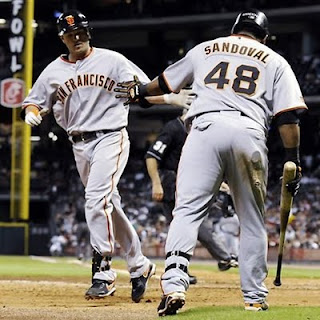 There’s a lot to be said about the awakening of the Giants road offense, and a lot of it has to do with the newest additions to the club, but Jonathan Sanchez deserves some major kudos tonight for picking up his first road victory of the season. Better late than never, right? Don’t look now, but this team’s most dangerous and unpredictable lefty starter is beginning to figure things out.

Getting back to that awakening offense...

How sweet was it for Freddy “Boom-Boom” Sanchez and the Kung Fu Panda to go back-to-back to put the game officially out of reach? I was on the phone with a friend who ended up getting an unexpected earful of nonsensical shouting. By the time I remembered I was s’posed to be contributing to a conversation, I’d nearly blown out her eardrums.

“Baseball works in funny ways. You hit the ball hard, that’s what you’re supposed to do, and you don’t get hits. It can happen to anybody. It happened to me. Hopefully the hits will all be at the end of the year.” - Bengie Molina, who collected three hits in a breakout game. As his fantasy owner, I’m hoping for the same thing.

Jonathan Sanchez collected an infield hit in the fifth inning to snap out of a horrendous 0-for-40 slump that stretched to June 12 — of last season. 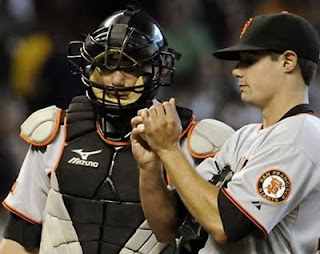 Three cheers for Joe Martinez! Not only did he come back from an injury that would’ve sent many a man to permanent obsolescence, but he’s been born again hard, and this team has rallied to his side. Joltin’ Joe’s teammates willed him to victory by overcoming a deficit of more than two runs for the first time since Sept. 20 of last year.

These are the games you need to win if you’re going to make a splash come October, and the Giants finally have the offense to do it. I can’t express how deflating a 3-0 second-inning deficit would’ve looked prior to this week. But with contributions from the new kids on the block and a landmark shot from Babe Whiteside, worry has been replaced with a calm I haven’t felt in a long, long time...

This victory puts the Giants twelve games over for the first time all year — indeed, for the first time in five years! It also marks the first time since Randy Johnson went on the DL that the team won back to back games started by the fourth (J-Sanchez) and fifth (Sadowski/Martinez) starters. Put that in your pipe and smoke it.

One final note about this piece of s**t ballpark and I’ll leave it alone: Something has to be done about the grassy knoll in centerfield that should’ve stayed in Dallas. One of these days, somebody’s gonna get seriously hurt, and when that day comes, all the Cassandras like me will be there to say, “I told you so.” 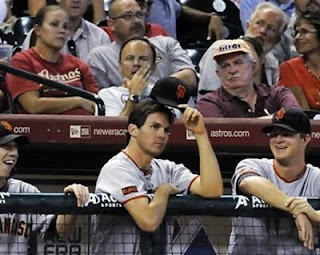 Regular McCovey Chronicles contributor Grant has a great piece on the trials and tribulations of being a die-hard fan of the Orange and Black. Reading it took me back to a time when all I did was wait for the other shoe to drop, walking around with a scowl on my face after a three-game sweep because the offense only went 2-for-15 with RISP. But let’s face it, after five disappointing seasons that ended without an October and 51 years of frustration piled upon aggravation, it’s high time someone brought a little bit of optimism to this idiom.

I’m typically more than comfortable in a cynical mode and would not hesitate to point out that this team has let us down many times before and could very easily do so again, but I can admit that I’m looking ahead with a smile on my face. After all, we weren’t even supposed to be in this position at this point in this season. Remember when our new Managing General Partner made .500 the benchmark for success in 2009? How easily winning can turn us into spoiled little children.

This is baseball, everybody. It’s not energy independence, comprehensive immigration reform or universal health care. In other words: There are more important things in life for us to fret about. Let’s do ourselves a favor and treat this game for what it is: entertainment. Our happiness should not ebb and flow with Pablo Sandoval’s OPS.

I will now descend from the soap box.
Posted by Butch Husky at 4:20 PM