82 wins. No matter what, remember that this team truly was greater than the sum of its parts. 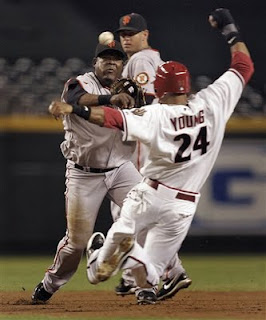 I went to the Valley of the Sun for a September series back in aught-3. I remember thinking Downtown Phoenix looked pretty dead at one in the afternoon on a weekday. If I had to guess, I’d say it had something to do with the triple-digit temps. But modern engineering is somethin’ else. You walk through two sets of glass doors — past the ubiquitous 2001 World Series trophy — and you’re hit with a glorious blast of 72° air. When you make it to your seat, you marvel at how open and spacious a domed stadium can be. That sensation definitely does not come through on TV.

What does come through is that Giants starters are not getting it done. This marked the fourth game in a row in which they didn’t make it through five and the seventh consecutive contest without our starter collecting a W. Tonight’s victim was Barry Zito, who coughed up not one but two leads to a team playing far south of .500 and appears to have rediscovered that inconsistent streak with which we’ve all grown so familiar.

You’ve got to give it up to the ‘pen for another boffo performance — particularly Brian Wilson, who’s certainly found his groove down the stretch. Over the past few games, this band of brothers has effectively stolen the show from the best rotation in baseball. Luckily, Fred Lewis’ speed made their efforts worthwhile.

God help me, I want to be happy that Franny’s getting some action, but there’s no positive way to spin this. UPDATE: Even worse news.

Regardless, K-Fran took an 0-fer in three trips.

The Giants scored an above-average five runs while going 1-for-11 with RISP.

"It was Fred Lewis running. That's why I hit him. He's tougher to double up than Frandsen. Thank goodness for speed." - Bruce “The Shaman” Bochy, obviously not a man to mince words 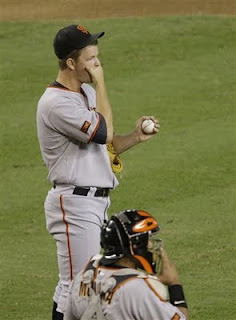 Close only counts in horseshoes and hand grenades, or at least that’s what my mother used to say when I told her I was close to finishing my chores. I’ve got another maxim I like to live by: When you’re up by four, you must win that game... especially when you get that lead against Doug Davis! The Giants experienced an epic fail in this situation thanks in no small part to a lack of stuff from my fantasy stud and permanent player of the second fiddle, Matt Cain.

To say that he looked terrible would not even begin to do justice to his performance. It was, quite simply, the worst you’ll ever see him. But you know what? He’s gonna come back in five days against the Cubs and show us how quickly he regains his focus and competitive edge. He’s been doing it as a Giant for four years, but it’s one of those things you can’t teach. It’s something you’re born with and nurture over a lifetime.

It’s safe to say Matt Cain has passed the trials of youth and emerged on the other side as a true craftsman. But tonight, he crafted a pretty ugly defeat for the Orange and Black, which took on an added frustration when the Rockies rallied (again) to beat the Fathers in Denver.

Once again, the bullpen was called upon to chow down on some innings as the Giants failed to get five out of a starter for the fifth straight game, and aside from a brain fart from starry-eyed rook Waldis Joaquin and a dong off Randy Johnson — likely making his final career appearance in ‘Zona — they rocked the house: 6.2 IP, 3 R, 3 BB, 7 K.

Consider it another benefit of having the second-least-used bullpen in the bigs coming into September that the Giants have survived this bleak stretch with any victories at all.

Props to the umps for getting it right on the replay of Gerardo Parra’s blast to right-center. I thought it was gone until I watched the extreme slo-mo replay twice.

OMG, grab your socks and hose and pull: Franny got a start! Unfortunately, the hits just aren’t finding K-Fran’s bat this season. He went 0-for-2 but worked a walk and scored on Matt Cain’s triple. (You did not mis-read that.) As of this game, his BA stands at a robust .149 with an OBP of .216, which shows that even though he can’t hit his way out of a wet paper bag, he might be able to walk out of it.

Oh yeah, and Baggs points out the Giants were 22-0 before tonight when scoring eight or more runs. Yeah, I had to read that twice, too.

"He just left a lot of balls over the plate. If you look at our hits, they are catching a lot of white. Normally he is on the corners with his fastball and slider." - Mark Reynolds, who took a hat trick with three Ks to break his own year-old MLB record and at some point doubled to knock in his 100th RBI. Talk about feast or famine. 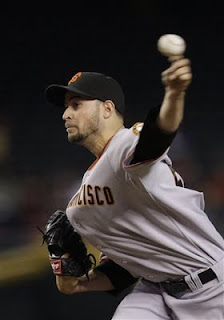 Leave it to Jonathan Sanchez to snap the starting staff out of a funk that saw Timmy and Matty lose in the same rotation turn for only the second time all year. Granted, he only made it through five and an out, but Bochy is quite obviously playing his cards every night like it’s Game 7 of the World Series. There’s no time to see if Sanchy works out his kinks in the sixth. The inning must end. The lead must be preserved. The game must be won, or the season is over, for reals, and we mean it this time. This cavalier attitude quite likely contributed to the now-snapped streak of five starts short of five innings.

It’s not hyperbole to say that Juan Uribe was the Giants offense prior to the seventh inning. The man had the team’s only two hits, and those hits drove in all the runs we needed off D-Backs’ young starter, Kevin Mulvey, who otherwise befuddled our bats in a re-run of a program we’ve seen before this year. If there is an improbable — and virtually impossible — run left in this team, it will be made on the back of the beloved nephew of a beloved Giant. Say it with me: “U! RIBE!”

I am gonna knock Freddy for not being honest and forthright up front. If he’d told the truth about his knee, he might still be in Pittsburgh, where he claims he was so happy. But I guess you can’t blame him when the Giants were offering him a chance to play on the first winning team of his career.

Reliever Jeremy Affeldt picked up his league-leading 33rd hold with a perfect eighth, prompting the question: What the hell is a hold?

Oh yeah, and tonight, the umps had it right the first time. But what is it about disputed home run calls in Phoenix?

"Hopefully, Penny can come back tomorrow and go even deeper." - J. Sanchez, apparently unaware of the double entendre his choice of words invoked 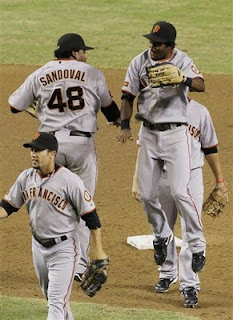 How often do the Giants score 18 runs in a three-game series? Okay, not as infrequently as I suspected when first scrawling down the question, but not all that often either. To be precise, it’s happened seven times in 37 three-gamers this season — twice against the Astros. (It also happened over three games of the July four-gamer with the Pads that featured Sanchy’s no-no.) The last occurrence came in Houston at the beginning of August, when the G-Men notched a whopping 21 runs at one of the high points of their season.

Regardless, it’s good to see at least a little consistency from the O-fence. Granted, they’re still not getting hits with RISP, but at least they’ve stopped getting all single-happy and started making their hits count. One run-scoring hit in a 5-4 victory Monday, and tonight, five runs on four hits. On Saturday in Los Angeles, the G-men scored one run on 10 hits in a 12-1 defeat. I don’t know about you, but the latter circumstance is much more frustrating from the fan perspective.

You may have already noticed a delay with some of my recent posts. Obviously, as the season winds down and playoff hopes begin to dim, the sense of urgency to blog my every thought wanes. That and work’s been kinda busy lately, and I don’t exactly get paid for sharing these little insights with you, my (three) loyal readers. Regardless, I will push on through and finish out the season right alongside our boys.

We’ve already passed the 81-win mark, ensuring a .500 season or better. But with a four-game gap and ten to play, it’s all over but the crying. In the season’s final posts, I’ll try to blend remorse for the passing of the 2009 campaign with optimism for the years ahead. God knows, there’s a lot of it to go around. I’ll also make a few bold predictions and add my own two cents as to where the Giants should look to improve (um, offense?) and where they should just stop tinkering (um, pitching?).

So stay tuned. The fat lady might be singing for the G-Men, but Butch is still fired up and ready to go.
Posted by Butch Husky at 8:00 AM