Ghosts of Giants Past

Does anybody else finds it rather odd that the Giants now have three guys on their roster who played on three of the past four teams to eliminate them from the postseason: Edgar Renteria ('97 Marlins), Bengie Molina ('02 Angels), and Brad Penny ('03 Marlins)?

Far as I can tell, they don't have anyone who played for the '00 Mets, but they did pay Edgardo Alfonzo to man the hot corner for two long and mostly forgetful seasons.

Ah, well. On to the baseball, shall we? 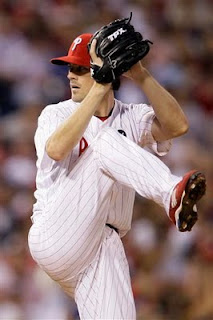 Okay, coulda done without seeing that one and had a perfectly fruitful life. What was that I said after the D-Backs series about Doug Davis and the success of lefty pitching against the Giants’ bats? Well you can add Cole Hamels to the list.

There is nothing in this world more frustrating than a 1-0 loss, especially when you never even had a chance to win. Kudos are due to J. Sanchez for continuing his recent roll. It’s obvious just from watching his body language that he’s felt a tremendous boost in confidence since his epic no-no on July 10th.

Now, I’m not one for believing in jinxes, so if you are, you might want to skip ahead a few graphs...

With the acquisition of Brad Penny and his subsequent dominance of a possible first-round opponent (see next entry), one could lead themselves to believe that the postseason rotation would include the newest Giant at the expense of the young southpaw who’s got this stat line since the break: 3.35 ERA; 1.17 WHIP; .190 BAA. (The fact that he’s 3-3 over that period says more about the Giants’ absent-minded offense than his pitching prowess. Wait, I think I’ve said this before...)

They’d be right to go with Penny. After all, the guy’s been to and won a World Series, and there’s no self-respecting Giants fan over the age of ten who wouldn’t remember that. In point of fact, his beat down of the Giants in Game 2 of the LDS that year is really what did them in. But it’s oh so easy to hate on Jose Cruz, Jr. Hell, I do it all the time.

Last week at a house party, my buddy tossed me a can of beer. It went right through my hands and straight to the floor. And what did I say? “Aw, look. I pulled a Jose Cruz Jr.”

I bet everybody who skipped a couple graphs are a little confused right about now.

Don’t tell me this wasn’t embarrassing as all get out.

From Baggs: The Giants average 3.58 pitches per plate appearance, which is far and away the lowest in the major leagues.

"I thought I was there. It was close." - Andres Torres, who was picked off of first base with nobody out in the top of the ninth in a one run game, on being thrown out at second base 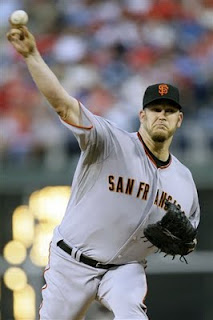 My kinda game, ladies and gents. Quick, painless, victorious, and injury-free, unless you count Panda, who’s been banged up for weeks. And the $100K man was up to the task. If we make it to the promised land by a single game, the signing will have been more than worth it.

I don’t know what Penny was smoking while he was with Boston but I want some of that. This guy looked like the Penny we saw back in ’03. Hard stuff, down in the zone, painting the corners, getting quick outs, and just plain mowing down perhaps the most explosive offense in the game in one of the best launching pads of all time.

Props are due to the bats for getting something going in support that performance, in particular, Juan ”U-RIBE!” and Aaron Rowand, who went back to back in the sixth. Those two jacks put the team at 96 on the season, eclipsing last year’s mark of 94, the lowest output in the Major Leagues. Of course, they had to do it against J.A. Happ, one of the studs of my fantasy rotation. (For some ungodly reason — probably his home split — I decided to sit him for this one, so the Nimbys avoided taking a hit from my real world team.)

Barry Zito was probably salivating over the quartet of runs supplied to his new rotation mate.

Adding to the eeriness I referenced in the lede, watching this series has been like having a front row seat for a performance of “Ghosts of Giants Bullpens Past.” I mean, holy effing sheet, dood. I know relief pitching is a dangerous occupation with a high turnover rate, but this is bordering on ridiculous. Scott Eyre, Tyler Walker, Jack Taschner, oh my! And if you want to take it a step further, I’ll raise you a Pedro Felíz just to sweeten the pot.

16 of 28 (57%) plate appearances against Penny ended in three pitches or less. The Major League average is 47%.

"There's not a guy who's called a better game for me in my career. I'd grab a pitch that I'd want to throw and he'd throw [the sign for that pitch] down. We were on the same page. I didn't have to shake [him off] a whole lot. That's pretty impressive for never catching me." - said Penny, a 10-year veteran 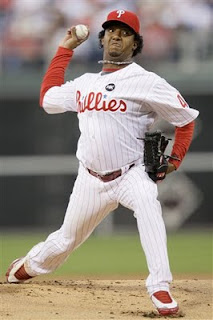 Dirty. Filthy. Nasty. Un-hittable. And that was the losing pitcher.

Somewhere along the line, between the surgeries and the stints on the DL with minor bumps and flares, Pedro Martinez learned how to pitch. He never had to before. The stuff he had in the late ‘90s and early aughts was so electric, he could toss it up there blindfolded and end up throwing a no-hitter. He’s a different man now, an older man, but he’s crafty like nobody’s business, and he showed it in the rubber match against the Orange and Black.

When Tim Lincecum came up in the spring of ‘07, the comparisons drifted to Pedro almost immediately. Their tiny stature and swing-through touch are a unique combination to the point of scaring off coaches and GMs for fear of injury cutting short their usefulness.

Tonight, we got to see them up close and personal. The Kid and The Master. Head-to-head. And it was fun up until the moment we lost. Good to see Timmy return to his double-digit-strikeout form. Sucked to watch our bats go quiet for nine innings following Gino Velez’s first-pitch leadoff home run. 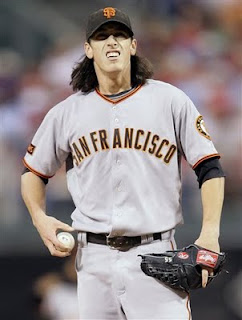 One more from Baggs, by way of statistical guru Ed Price of AOL Fanhouse.com: Lincecum became the first Giants pitcher to log seven or more innings, allow four hits or fewer, strike out at least 11 and lose since April 26, 1968, when the Dodgers defeated Ray Sadecki at Candlestick Park.

"It's ridiculous how nasty his stuff still is. When you watch him, it's obvious he knows what he's doing out there." - Lincecum on Martinez

"He reminds me a little bit of me, but he's twice as good as me at this time of my career. It took me seven years to win a Cy Young." - Martinez on Lincecum

All things considered, you hate to lose a series when you give up three runs in three games, but it’s not like we’re not used to this from the G-Men this season. Despite the fact that the offense couldn’t produce, the staff held this team to three runs in this park, and you have to imagine they’ve earned the respect of the entire league. And after their anemic performance at the Cove just one month ago, you have to imagine this Phillies team is more than a little intimidated by our young guns.
Posted by Butch Husky at 4:20 PM