Back in the Saddle 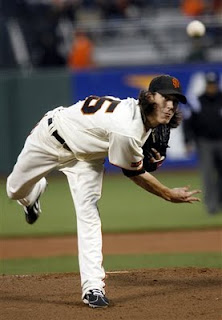 It's one of those things you don't like to talk about. You avoid the subject at all costs. The "What if..." sensation tickling the back of your mind. And when the circumstance you've been avoiding suddenly materializes, it's like a sucker punch to the gut. Kinda like the guy who goes his whole life without ever taking a physical because, as he states with supreme bravado, "I feel fine." One day, he walks into the doctor's office and finds out cancer's eating him alive and he'll be dead in a matter of weeks.

Okay, maybe it's not that bad, but finding out Tim Lincecum is gonna miss the first start of his career because of... gasp!... back spasms was certainly a sphincter-shrinking moment. Muddled together were the emotions of the moment, trepidation for all that this team had worked for all season long, anticipation of MadBum's big league debut on the bump, confusion as to the cause — was it because of his mechainics? — and sudden doubt in beliefs which I had previously held as sacrosanct, such as the genius of Chris Lincecum's coaching techniques.

The team had just returned from a moderately successful homestand. Moderately in that they survived to go .500 despite scoring a grand total of 12 runs in six games. The trip ended on a sour note thanks to Prince Fielder's theatrics, and less than 24 hours later, the G-Men had to strap it on and play the next Biggest Game of the Year, suddenly trailing the Rox by 2 games. But Brad Penny went out and closed the door, the offense grew a pair, and for one day, it looked like we were most definitely in this.

Then Lincecum's back started balking.

It's strange to say, but it probably meant the season. He only missed one start, but that was just enough of a bump in the road to skew the alignment of the wheels on the good wagon Gigantes. MadBum went out and pitched a wonderful game that by all rights he should have won, but the absence of the Ace, the Freak, the Franchise, the Kid, made everyone's heart sink just a little bit, and if it was like that for the 35K in attendance, then you gotta believe it was like that for the 25+ guys in the dugout. 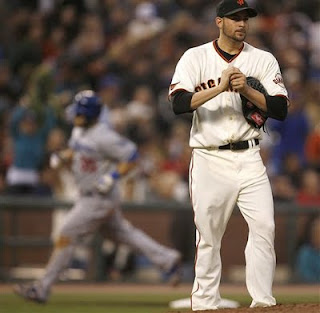 The funk of the next four games was a purely mental one. There's no other way to explain the seeming disinterest in playing baseball displayed by the Giants over this most crucial stretch of games. We owe the Padres a huge thanks for knocking the Rockies off the high horse of their eight-game winning streak and taking the final two at Petco to keep us in the hunt. But serious praise must go to Brad Penny, who has quite simply become the Unbeatable Giant. If his 24-inch neck and his 97-mph fastbal hadnt been there to stop the bleeding against the Hated Ones on Sunday, there would have been no use playing the games Monday, Tuesday, or Wednesday.

In each of six games with the Rockies in our yard over the past two weeks, our starters have kept us in the game, and the offense has stepped up at just the right moments, and it all would have worked out so wonderfully had anyone been able to get a hit with runners at second and third and no outs in game three. Six batters came up, spread across two such situations, and all of them made outs. All of them. Minus that brain fart of Alexandrian proportions, I think the Giants have made clear who owns this stretch of King Street.

With the whooping they've laid down on Colorado in recent days, los Gigantes have also laid down the gauntlet for what is still a possible Wild Card tiebreaking game on Monday, October 5th. Thanks to a win in the season series and a new rule form MLB, the G's would host the purple pitching eaters. I don't know about you, but I like our chances... unless, of course, the Rockies sign Neifi Perez in the next couple days. 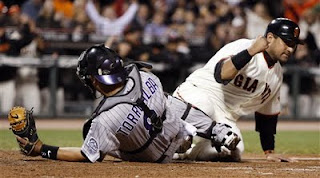