So much has transpired since the Giants hung up their spikes it’s been hard to keep up, especially if you’ve been spending your free time cruising I-5 with Tim Lincecum.

Unfortunately, your trusty friend Butch is not so lucky. He has to work for a living like anybody else, but he hasn’t forgotten his loyal readers as the seasons turn and the cold chill of winter sets in. So, without further ado, I doth present: 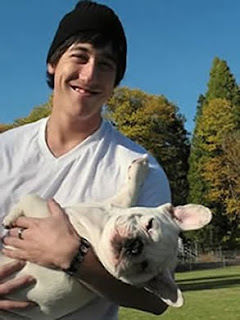 How can you top this? The Giants had not been home to a Cy Young winner since 1967 before Timmy broke through last year, and while he didn’t have as consistent a season as he did in ‘08, he learned how to finish games, anchored the best rotation in baseball, and grew one of the finest mops in baseball, all while posting peripherals that would make Fernando Valenzuela drool.

Did he truly deserve the honor? Bet your ass he did. Sure, you could make a case for Carpenter or Wainwright, but I’ll tell you this much: It’s a lot easier to pitch with confidence when you’ve got Albert Pujols (and Matt Holliday) in your lineup. The intestinal fortitude displayed by Lincecum, Zito, Cain, et al. with virtually non-existent run support is nothing short of amazing.

2. Sabean and Bochy get contract extensions

This would have been number one had it not been for Timmy’s repeat and the fact that it was a virtual no-brainer after the Giants hit the All-Star break 11 games over .500. It would’ve taken an absolute collapse for Mr. Neukom and Company to go hunting for a new front office guru and field general, and while that’s never out of the realm of possibility when it comes to the Giants, the 2009 team proved resilient and determined, which reflects very well on the job both of these men have done to build a winner.

3. Hated Ones' owner separates from wife

This might not have appeared on the radars of a lot of Orange and Black faithful, but it’s a significant development in the power structure of the National League West. If Frank McCourt faces divorce proceedings, his assets — including the Hated Ones — could be frozen, preventing “Nuclear” Ned Colletti from wheeling and dealing to his heart’s content this offseason... and at next year’s trading deadline. 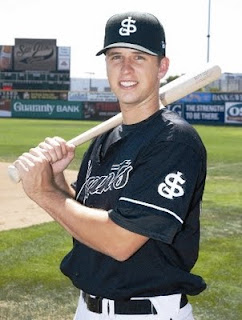 Another piece of news that wasn’t really news. We all knew Bengie would not be back. It was a simple matter of math: he wants a multi-year contract; the Giants will only offer him one year. We also knew from watching him in limited action that Buster Posey’s meteoric rise to the majors took its toll on his young body, and psyche. That’s not to say we won’t see him behind the dish five days a week by the end of the season, but it puts him in limbo to start Spring Training, and it opens the door for a possible free agent signing. Pudge to the Giants? Oh, lordy...

5. Sabean says MadBum could start 2010 in the rotation

The most welcome news of the fall so far was this nugget that got buried beneath the Buster-Bengie soap opera. Once Brad Penny declined a one-year contract, it made very little sense for the Giants to pursue outside options for the role of fifth starter. With a rock solid 1-through-4, the Giants offer Madison the protection he needs to accrue the big league experience he needs to take his game to the next level. The numbers show he has nothing left to prove or learn in the minors. Like Lincecum in ‘07, this kid’s time has come.

Okay, I know you all thought your buddy Butch would put this at number one with a bullet, but seriously, the fallout from this sidenote was so miniscule that it’s hard to call it big news. So the kid smokes out. Nothing anyone with half a brain couldn’t have figured out on their own. That the Washington State Police made it official was simply a big smile. How can marijuana’s detractors gain any traction when a two-time Cy Young winner and an eight-time Olympic gold medalist are both getting lit in their spare time?

They may not yet be household names, but 1B Brett Pill, OF Francisco Peguero, OF Darren Ford and RHP Kevin Pucetas are now protected from the Rule 5 Draft. You can check out Andy Baggarly’s breakdown of their many talents here. In other news: clutch hitter Juan Uribe declines a one-year contract. 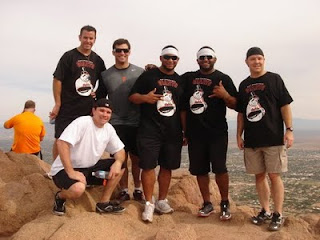 Kevin Frandsen is posting a .300 BA with five doubles, a homer, and seven runs scored in 12 games for Gigantes de Carolina in the Puerto Rican Winter League. Teammate “Nasty” Nate Schierholtz is seventh in the league with a .346 average and an OPS of .982. But the MVP of the league so far is Carolina catcher Orlando Mercado, with a robust line of .444/.512/.583. Most impressively, Mercado has only one strikeout in 36 ABs and five walks.

That’s all for now. I’ll return shortly after we sign Dan Uggla and move Freddy Sanchez to third base.
Posted by Butch Husky at 7:59 AM