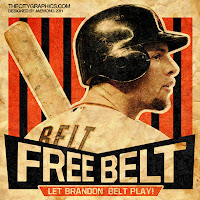 My latest obsession is #haters. But not just any haters. Haters who hate for the sake of hating. The absolute bottom of the barrel of hate. Blind hate. Senseless hate. Hate that defies all logic. And in the case of sports fans, hate without recourse. Hate that festers unfulfilled over a lifetime of anguish, eventually boiling over in a stream of vitriol directed at teams that aren't listening and couldn't care less – no matter how much money you spend on garlic fries and panda hats.

Hate borne of an inability to do a damn thing about how one's team handles its business.

Take, for use of a convenient example, the recent #FreeBelt phenomenon. Anyone who follows los Gigantes and their 253 thousand followers on the Twitter thingy knows the hate for Bruce Bochy goes far beyond his reluctance to get down on his knees and bow at the altar of the Baby Giraffe. It extends to any opportunity our grizzled ol' manager takes to tweak the lineup.

You see, baseball fans have become quite astute of late. We have all these fancy metrics to apply to the myriad statistics compiled during an average game that we use to pass judgement on managers and front office types, who are obviously aloof members of an elite royal class with no idea how to run a baseball team. If they'd simply let the fans vote on every decision... I'm thinking a smart phone app. But first, they'd have to do something about the overloaded WiFi at AT&T.

As incomprehensible as it may seem to many of you, it's quite likely Bruce Bochy has never even heard of VORP or WAR or BABIP. And yes, sometimes he ignores splits entirely and goes with his gut. And every time he does, the vigilant #SFGiants Twitterati are there to shove the stats down his nonexistent digital throat.

Of course, they only vent to feel better about themselves. They know nobody's listening... Well, somebody is. I'm listening. So are the rest of their followers. And while most of the Fringers are actually quite knowledgeable, witty, and sometimes downright amusing, any goodwill they've built up in my book is quickly erased like a white board every time one of them posts something along these lines:


@sfgdiehard2010 Nice lineup, Bochy. Looks like I don't even have to watch the game today. What a dumbass. #FreeBelt

Let's ignore for a moment the fact that Bochy has a limited number of players who've shown any consistency with the bat this year. Let's forget that Brandon Belt has received the lion share of ABs at first base. Let's disregard that after a good two-week opening, the 2012 Giants are headed for another epically bad season of run production.

Let's put all that aside and examine this tweet completely out of context... First off, the sarcastic aside to Bochy isn't necessary because this tweet isn't directed at Bochy. It's directed at other fans. The writer wants us all to know how smart and funny they are.

Secondly, the writer's full of shit. Anyone who bothers to tweet about the lineup every day is not the type to turn the game off when it doesn't agree with them. Fans like us will watch the most mind-numbing embarrassment of a game from the first pitch to the last. We can't help it. We're addicted. Am I right, @themarywalton?

Finally, does the writer really need to resort to name calling? Is there no vocabulary beyond the profane for that which they wish to express?

If this were simply a trend that popped up on days like yesterday, when Bochy ran out the Grizzlies 2.0 lineup, I'd understand, and shit, I'd even sympathize. Nobody has enjoyed watching the Giants offense this season. But that's just it. It's the whole damn offense that's gone anemic. (Okay, maybe not Melky.)

Bochy is doing what a manager does: manage. You don't like it? Fine. Complain once. But to bitch and moan every single day kinda takes the sting out of your argument. And maybe I'm missing it, but I don't see anybody posting alternative, run-scoring lineups.

And god forbid one of Bochy's machinations actually bears fruit and – I don't know – HELPS the team! It only means he's going to keep... doing his job. And we can't have any of that!

Seriously, people, what's the guy gotta do? Run the same eight dudes out there every day? News flash: We don't have eight dudes who deserve to start every day. That's not a knock on management. It's just a sign that our young talent is still maturing. It's a sign that we have to be, wait for it, patient.

What's truly galling about this brand of hate is that it ignores how far Sabean and Bochy and all the sticks in the mud have come in recent years. Who could've imagined even two years ago that the Giants would field an entirely home grown infield to open the 2012 season? Hell, in the Bonds Era, they would've traded away the the draft picks that got them Posey, Lincecum, Bumgarner, Panik, and other first-round talent.

This is a new Giants team that expects to compete every year with the guys they develop and a few key pieces added through free agency and trade. Sounds like a model we all would have applauded in the lean years of '05-'07, when the life was nearly sucked out of the old ballyard. But now that we have that ring, nothing, it seems, is good enough.

Chronicle beat writer @hankschulman hit the nail on the head yesterday in one of his many 140-character battles with the Fringe:


Gotta say, the funniest thing I've gleaned from 'Net, Twitter, is how many fans get up in arms when something works, but not the way ... they wanted things to work. I get the complaints about no Belt today. I really do. But they've scored SEVEN RUNS.

I hate to tell you this, kids, but he's right. We sound like a bunch of spoiled brats. And yes, I'm including myself in your ranks. After all, I'm just like you: a hater. Only I don't hate on my team. I hate on the haters.

See you on the fringes.
Posted by Butch Husky at 11:18 AM