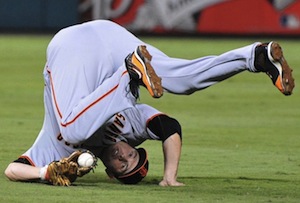 Reading through the fairly standard What-Have-We-Learned-After-One-Month blogs and off day stories, I was struck by this note in @stewardsfolly's Sunday postgamer:


OK, so April wound up 12-10. Not bad, considering an 0-3 start, a struggling ace, a lost closer, a projected starting second baseman who never played and Aubrey Huff’s ineffectual start and subsequent anxiety issues.

Makes you think, don't it? Wasn't this year supposed to be easier?

Hadn't Los Gigantes kicked the injury bug that plagued them throughout 2011 after successfully avoiding major trips to the trainer's table in the Year of Glory 2010?

Wasn't Aubrey Huff supposed to rebound with his typically inflated even-year production after stealing the Rally Thong back from the Hall of Fame?

Didn't Dave Groeschner find a magic potion to heal Freddy Sanchez of his San-Francisco-itis once and for all?

On Opening Day, we thought the answer to all of these questions was a resounding "Yes!" But life – and baseball – has a fucked up sense of humor and a really malicious case of kismet. Read the excerpt from Carl's post again. Sub out a few names, and it could've been written in May or June of last year.

"Consider the lilies of the damn field," as Ulysses Everett McGill would say. There's no flower that smells sweeter than the trades Brian Sabean maneuvered this offseason to install Angel Pagan and Melky Cabrera at the top of the lineup.

Admit it, after the opening road trip, you were cursing the day Pagan was born and crying on your Twitter timeline for the Mets to return Andres Torres – never mind that the dude's been on the DL since Opening Day. Hope you're all eating your tweets now. He's no All-Star, but the devil we know has certainly found himself after struggling early on.

And I don't need to link you to Jonathan Sanchez's Baseball Reference page for you to know that the #MelkMan has definitely delivered for the front office on that deal. Cabrera's production at the plate – and surprisingly plus defense – makes him an easy candidate for an extension, especially when you consider he's just entering his prime.

Don't know about you, but a Cabrera-Brown-Schierholtz outfield would suit me just fine in 2013. (Not to mention, all three of them are on Twitter! #onetrackmind)

So don't let the Dodgers' quick start get you down. Nobody's running away with this division. And when the Orange-and-Black start catching the ball, and a few more two out hits with RISP start dropping in, we're going to see quite a battle between the Cali rivals in the Dog Days of Summer.