Around the Melky Way 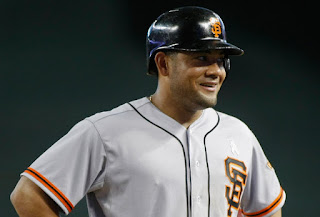 I hate to add to the deluge of phallus stroking over Melky Cabrera, so I won't. But I had to give this post a catchy title with a milk pun so it would get mad hits on Google. I'm also loathe to talk about Brandon Belt because it's like beating a dead baby giraffe. And I'd rather not ponder what we're going to get from Timmy in a little less than an hour.

But I feel like this moment in the Giants' season is screaming out for something, a defining moment. I've seen teams like this before. We all have. They meddle around the .500 mark for a month or two before catching their stride and riding a summertime wave into the postseason... or falling off the deep end entirely, the dog days of summer slowly, agonizingly ripping away every last shred of our pride.

So what's it going to be then, eh? Who's gonna wear the thong? Who's gonna get the big hit in the critical spot? Who's gonna light a fire under this club's ass and get them to stop playing like a bunch of posers?

Maybe that moment has already come. Maybe it was Angel Pagan's 90-foot dash-and-dive to beat out an infield hit in a game where his club was trailing 8-zip. Maybe it was Hector Sanchez's 14th-inning blast into the left field bullpen at Miller Park. Maybe it's Ryan Vogelsong.

All I can say for sure is it's not Zito.

It should be abundantly clear by now that Sabean will eventually need to deal one of the blue chip catchers behind Posey on the depth chart. Maybe two of them.

Hector Sanchez has been a revelation behind the dish in addition to his bat, which we knew had potential. If he can keep getting down on Zito's patented 55-foot dive balls, I can't think of a much better backup for the 25-man.

Meanwhile, you've got Tommy Joseph and Andrew Susac putting pressure on the team to move Posey to first base. But then you really create problems for everybody's favorite project: Brandon Belt. And this is all beside the point that Buster wants to stay behind the dish.

I say package Joseph or Susac in a deal for a middle infielder with an OBP over .300 and some young pitching — because you can't ever have enough of either, as we're finding out.

There would be no one quicker to come the defense of Brandon Crawford than yours truly. It's not because he's a handsome version of Brian Bocock or because he's got a fancy nickname or even because his hair has a pleasant sheen to it in the afternoon light... It's because he's a beast with the glove.

Only problem is, he's playing like he doesn't own a glove and never played shortstop in organized ball. Yeah, it's been that bad. Ten errors bad. There was a point last year when I didn't think this kid would make ten errors in his entire career. He looked that good.

Now, it's obvious that the demons have gotten into him, and they'll need to be exorcised before too long, because this team doesn't have any other options at the 6, and there's not exactly a bevy of talent out there to replace him.

The good news is, ever since he was inserted into the No. 2 spot in the batting order and started seeing more pitches that don't break, he's become a touch more productive. Let's hope Bochy rides that lightning until it hurts.

As a means of maintaining my sanity over the course of a grueling 162-game schedule, I fully subscribe to the notion that every team is gonna win 60 and lose 60. It's the 42 in between that count. So I file every game in one of those three categories.

Where a particular game lands on my spectrum sometimes has more to do with context than the final score or statistics involved. Just because the boys lost 1-0 to Clayton Kershaw doesn't mean there was anything they could do about it. It's Clayton fucking Kershaw. It's the same as losing 14-0 to me. But if Ryan Vogelsong beats Kershaw 2-1, that's an instant classic Middle 42 game.

The same philosophy works in reverse: If Matt Cain's pitching, I expect to win that game. So if the Giants win, it goes in the other 120. It's when he gets Cain'd that the game ends up in the Middle 42.

With that, through 45 games, here's where (I think) we stand:

As you can see, by my estimation, the team is playing above average in toss-up games and below where they should be in games where the outcome could have been predicted. Over the course of the season, the latter record should level off. If they can maintain this pace in Middle 42 games, I predict a happy end to the regular season.
Posted by Butch Husky at 3:14 PM