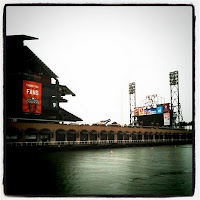 What the hell is lurking in the waters of McCovey Cove? The ghosts of Candlestick Park? Ken Kesey's Kool-Aid? A magical dragon called Huff? Inquiring minds want to know, because this is getting ridiculous. This whole post was going to be about my experiences at the park yesterday and the most inspiring win of the season, but it seems as though every game keeps trumping the last. It's gotten to the point that when birthday boy @JeremyAffeldt drew a walk in the bottom of the 10th, I started laughing uncontrollably. I'd hardly contained myself by the time Freddy "Ballgame" Sanchez ended things with a patented oppo slap job and Chris Stewart had his moment in the afterglow that pervades everything that happens at 3rd and King these days... aside from one quite horrific night.

There is no stat for what the Giants are doing this season. There is no sabermetric that could possibly explain it. How can a team with a run differential of +4 be eight games over .500 and a game ahead of the hottest team in the sport for first place in their division? That's just not natural. And neither is this team. It's like the pennant race and playoff chase of 2010 carried over into spring training and kept right on bucking. If they'd only come all the way back on Opening Day against the #Doyers, you could say it's been a perfect storm that's carried the Giants thus far. No doubt, they've had moments that confound the soul and crush the spirit, this re-united band of fartknockers. But they've had far more that elicit orgasms of joy all across Northern California — and all the way across the country in a Manhattan bar at two in the morning.


The arc of this 2011 season becomes even more ridiculous when you consider the litany of injuries that has plagued the Giants clubhouse all year after mostly avoiding the place during the World Series Championship run. Pablo Sandoval, Cody Ross, Andres Torres, Barry Zito, Santiago Casilla, Mark DeRosa, Mike Fontenot, and most recently Brandon Belt have all spent time on the DL. Gerald Dempsey Posey III, as we all know, is out indefinitely. Even the baby "Bullet" Darren Ford has gotten to know the business end of the trainer's table. Yet this team continues to win, and they don't show any signs of slowing down. They're 17-8 in one-run games, and just when you thought the magic was no longer inside after a sweep at the hands of the Filthy Fish, they come out and play incredibly hard-nosed, never-say-uncle baseball for four straight days.

The best part of it all? They've got six more games on this home stand and 12 more this month. Not to mention three in Oakland, which is likely to turn into AT&T lite next weekend. And I'm in line to be there to see my fair share of the torture. I should invest in a flask and some sweet Tennessee nectar to get me through the first six innings of every game. I've already got a kazoo to get me through the final three... or more.

Wtf? I have no idea.

To say the dude is beasting comes nowhere close to doing justice to the numbers he's putting up. But the true insanity of his comic book rise from the ashes is his "origin" story: Top draft pick traded away after two middling seasons to Purgatory in Pittsburgh in exchange for a staff ace, five years in Steeltown, a few more in Japan, and suddenly back in the States and camping with the Giants this spring.

I'm not gonna look up the tweet, so you're gonna have to take my word that I liked him to make the Opening Day roster for long relief. Looking back, I can say it was because of the story more than the numbers, even though he had a solid preseason. But damned if this isn't another case of Cody Ross Fever. Thanks to the fluke-ish non-start to Barry Zito's season, the Giants have once again caught lightning in a bottle, and now he's the best starter they've got...

On the opposite end of the projection spectrum, I had no problem with the Tejada deal at the time, and really, I still have no problem with it. Unfortunately, the dude is a god awful mess at that plate, and I just need him out of the way. He's made some nice defensive plays, but the grounders to second and bloop singles ain't doin' it for me. Release him. Eat the $6M or try to pawn him off on someone else for a bucket of warm beer — you KNOW somebody's that desperate. Get him off the roster so Bochy isn't tempted to give him starts in deference to his veteran status...

While we're on the subject of DFA'ing Miguel Tejada... I'm really liking @BCraw35 at short, and not just because he looks like Stamos. The kid's got soft hands, a wicked glove, and a good approach at the plate that netted him a another pair of big league hits tonight. He's got a growing number of nicknames: The Professor, Craw Daddy, Stamos, etc. But I'm sticking with my own mash-up: #ProfessorStamos...

On the subject of nicknames, how about "Widespread Panik"?
Posted by Butch Husky at 9:01 AM