A Tale of Two Bochys 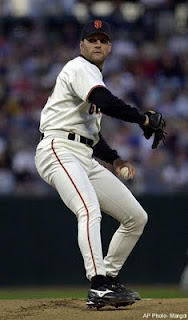 Way back in September of '97, as the Giants were hurtling toward an eventual National League West pennant, two days after Brian Johnson's epic dance around the bases at the 'Stick, smack in the middle of taking three of four from the Fathers at ol' Jack Murphy Stadium — when that was still its name — the Giants played an absolute stinker. It was, for all intents and purposes, an all-too-common brain fart in an otherwise memorable season.

It's safe to say the '97 Giants took their share of beatings. 16 times they gave up 10 runs or more, including four 15-plus spots, two 11-0 losses to the Hated Ones, and a 19-3 shellacking by Felipe Alou's Expos. But the 12-2 drubbing they absorbed at the hands of Bruce Bochy's Padres on September 20th was significant for two reasons: 1. It was my first game in San Diego. 2. My favorite pitcher at the time, the great Shawn Estes... got lit the f*** up.

I'd driven down on my own after failing to convince any friends to join me. I was flying high on the Brian Johnson Kool-Aid, and cocky enough to think I could find a sports stadium without the help of, you know, a map. (Mind you, this was 10 years before the introduction of the Google Maps app.)  Needless to say, when I pulled off I-5 in Downtown San Diego, the game was just getting underway. As I stopped for directions and tuned in to the Padres flagship, Estes was already in trouble, Greg Vaughn was about to have a very good day, and I was about to embark on a journey through the Southern California suburban wilderness...


By the time I reached the yard — nowhere near Downtown — parked my '92 Geo Prizm, snagged a $10 ticket, and worked my way to the top of my section above the right field wall, Dusty Baker was coming out to give Estes an early shower after getting just five outs, and a parade of forgettable relievers had begun. To say I was deflated would not be doing the moment justice. I could've just turned around and headed back to my apartment at USC once the game started going south. But I didn't. I bought a ticket, and I took the ride. Because that's what a fan does. A fan just loves watching the game. No matter how excruciating... 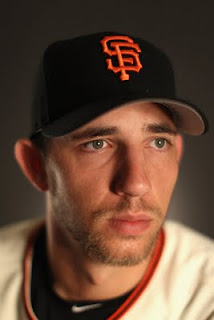 When I sat down in my seat at AT&T on Tuesday night, I knew I'd missed something. I'd run into some old friends outside, been stiffed twice by downed ticket kiosks, and had to answer a work call, all of which kept me from punching my stub for a good 15 minutes after first pitch. I saw the Giants in the field and figured it was the top of the second. That's when I looked at the scoreboard... and kept looking... and looking... More like staring, really. And long after I'd absorbed all the statistics the largest open air HDTV on earth could provide, I kept staring into its pixelated brilliance...

1B, 2B, 1B, 2B, 1B, 2B, 1B, 2B, K, 2B. And there was Madison Bumgarner, handing the ball to Bruce Bochy. You wanna tell me this game don't work in cycles? The friend I'd brought along to share the evening inquired as to why I was laughing. "Nothing," I said. "Just laughing to keep from crying." He offered to pay for his ticket. I told him to buy me a beer and we'd be even. Besides, we'd need a little liquid courage. It was gonna be a long night at the ballpark...

> Have another look at the box score from that '97 game. A few odds and ends: @MarcKroon gave up one of the Giants' runs in an inning of work relieving future Hall of Famer Pete Smith. Some kid named Rich Aurilia scored that run after singling as a pinch hitter. Barry Bonds and Jeff Kent went a combined 0-for-7. Shawn Estes' record FELL to 18-5. And who the hell is Cory Bailey?

> I don't mean to hate on Marty Lurie, but I was ever-so-grateful to KNBR for bringing back Mychael Urban and sparing me another long ride home after a weekend loss suffering through Marty's drivel. There, I said it. But come on, I can't be the only one. The dude kills me for three reasons: 1. He humors the most ignorant callers and even supports their brain-dead armchair baseball philosophies; 2. The man has no original opinions — just look at this tweet and tell me there's anything going on up there worth more than a bucket of warm beer; and 3. He came out of nowhere to take over a very important role in the life of a Giants fan, and while he seems like a decent man, this is not his bag. We'll save the @Byrnes22 rant for another blog...

> I'm not gonna pile onto the offense. It's been good to see a little life with RISP the last couple days. Goes to show how good the starters can be with even a modest amount of early support. But suffice it to say, it's obvious everybody's pressing, even Huff, who's having a fairly decent month — though he hasn't hit a home run since he went all buck wild in St Louis. I don't think it's going out on a limb to say Torres is the key. He has GOT to be more patient at the plate. How he's managed to keep his OBP over .300 for June while posting a sub-.200 BA is beyond me, but he's doing it. A few more hits couldn't hurt, though...

> I could live without seeing that Posey-Cousins collision replayed ever again by any network, and I'm pretty sure both of them could to...

> If any STH's out there are interested in a little alternative #SFGTweetUp — that doesn't require a special ticket — meet up with all your favorite tweeting #SFGiants fans after tonight's game at Pete's Tavern across the street from the ballpark. Use the hashtag #STHTweetUp to identify yourself!

That's all for now. See you at the Cove tonight, folks. Will it be Good Dirty... or Bad Jonathan?
Posted by Butch Husky at 9:01 AM