You really can't start worrying yet. 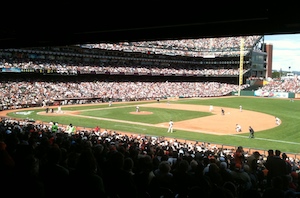 Seriously. It's just as reactionary as getting all hyphy 'cause your team jumped out to a hot start. Admit it: If the Giants were cruising through the first few weeks of the season, you'd be all over Twitter and the blog comments talking nonstop smack about how the Boys were on their way to a repeat and y'all better watch out! And if they were barely scraping by like the, ahem, Red Sox Nation, you'd be paging Chicken Little and devising new and exciting ways to kill yourself... slowly. But everybody regresses or progresses to their natural mean at some point. Everybody's gonna win 60 games. Everybody's gonna lose 60 games. It's what you do with the 42 in between that counts.

Saturday, April 9, San Francisco: Giants 3, Cardinals 2 — The Giants overcome a 2-1 deficit in the bottom of the ninth on a "Michael" Tejada double that's badly misplayed by Colby Rasmus in centerfield.

Tuesday, April 12, San Francisco: Giants 5, Dodgers 4 — After Timmy gets punched in the gut by a three-spot in the top of the fourth, his offense rallies back against Chad Billingsley, and Aaron Rowand creates a run to overcome a late homer from Marcus Thames.

Sunday, April 17, Phoenix: Diamondbacks 6, Giants 5 — The G'nts fight back from a Bumgarner Special (3 runs in the third) with homers from Huff, Posey, and Pandoval to take a late lead that they eventually blow in the 8th. They lose in 12 after being on the verge of a road sweep.

So don't worry your pretty little heads just yet. I'll take this 10-10 team over a lot of the duds I'm seeing out there courtesy of the MLB Network. And in case you can't be soothed, I'm going to the Cove today to add a dash of Butch's voodoo to the water. Dirty needs all the help he can get.

UPDATE: In case you were wondering, yesterday was one of the Middle 42.
Posted by Butch Husky at 10:37 AM