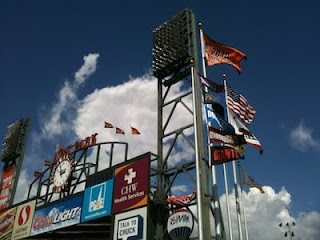 It was like a tiny miracle. After the pomp and the circumstance, after the game ball was presented to the fans, and the flag was presented to the team, and Brian Wilson made his mad dash to the flag poles in center field, and the crowd roared as it was raised into the crisp cobalt blue sky on one of the prettiest San Francisco days you'll ever see...

Like everything else about the 2010 Giants, one of the final codas came together like a fine cocktail or a tasty salsa. As the words of Freddie Mercury rang throughout the park, the air was still over McCovey Cove, and as the music behind the words swelled to a crescendo, and the orchestral choir joined in to sing out "We are the champions!" a breeze caught the banner and set it ablaze in a wash of orange and black, and the words "2010 World Series Champions" unfurled for the 43,000 faithful to admire and enjoy. And we did bask in the glow of the achievement of our baseball-loving lives. And the air smelled sweeter. And the sausages were delicious.

And then, they played a game. I'm not going to bore you with the particulars of the 5-4 epic battle that took place by the shores of San Francisco Bay on April the 8th in the year 2011. I'll leave that to scribes more talented than myself. Like this guy. Or this guy. Or this guy. If you want to know what I thought of the game, you can check my Twitter timeline. I will say this: No matter how much we want to ditch the torture idiom, it will always be there for this team. We are not Red Sox Nation. We'll never blow anybody away with our talent on paper. But boy, when this team comes together, they can do just about anything at any given moment. And they did it all yesterday.

I feel kinda bad for Eli Whiteside. Poor dude was the only guy on the 25-man who didn't get into the game. But that happens when you're the backup catcher to the reigning Rookie of the Year. And I have a feeling he was just as keyed up as anyone else in the park. He'll get his chance to contribute to this season's success or failure. Baseball finds everybody on that bench sooner or later, and makes them answer for themselves.

It also finds new ways each and every day to make you turn your head and say to the person next to you, "Damn, I've never seen that before." Case in point: Tonight, we #PutARingOnIt...
Posted by Butch Husky at 3:44 PM