The Wrath of Chavez Ravine 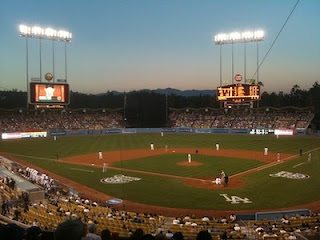 It could have been any of us. I've been going to Giants games at Chavez Ravine for 15 years. I've seen some crazy shit. I've seen enough to keep me from being surprised when things like this happen. It's the cost of doing business when your target market is alcoholic thugs. Yeah, I said it. But they're just words. Much as I'd love to sometimes, I know that it's just not right to crack a Doyers fan over the back of the head and kick him while he's down. It's just not right to shank a guy in the parking lot because he's wearing a different jersey. It's just not right to shoot another man over baseball...

Yet all of this and more has occurred at Doyer Stadium in just the last eight years. And that's not to mention a million tiny slights, thousands of needless confrontations, and hundreds of unprovoked assaults. I've seen the way we treat their fans in our yard. Once, at Candlestick, I saw a Giants fan boo a little girl in a Doyer hat. But I've never seen a 10-year-old Giants fan call a grown woman a "motherfucker" and flip her off while his father cracked a prideful grin. Yet that happened to my friend on Thursday night, the same night Bryan Stow was beaten, dropped, and kicked until he was thoroughly broken.

When I first read the news on Friday morning, while my friends enjoyed a late sleep at our hotel in Little Tokyo, I wanted to puke, but not because I was shocked. I nearly got sick thinking of how to tell my friends what had happened. They'd barely made it to our seats in the Infield Reserve the night before without losing their cool and engaging the enemy, just as I'd warned them not to do. By the end of the game, they were ready to crack. They'd never felt the wrath of Chavez Ravine. Never felt what it was like to lose the game and your pride all at once.

It was hard getting anyone to say much over our Roscoe's Chicken'n Waffles. Even a brief encounter with Dave Stewart — busy chowing down at a corner table — couldn't lighten the mood. How was I supposed to tell them that we were the lucky ones? That we got away easy? Heck, we didn't even get our tires slashed, our paint job keyed, or our radio antenna twisted like a pretzel — all of which have happened to my Zentra over the past decade plus. I wouldn't tell them, I decided. I'd let them see it on the ESPN ticker.

But when they woke up, I had to be the one to break the news. I had to be the one to tell them we could go right back into the belly of the beast. That we had to go back. Because if we didn't go back, it would be like giving up, conceding defeat to the ignorant fuckers who did this to one of our own. We had to go back to represent for our team, for the Bay, for our way of life — a way that doesn't allow for douchebag-ery. So we went back.

From what I could see, security was no tighter on Friday than it was the night before. But one thing was for sure: There were a lot less Doyer fans. This in and of itself was a good thing. The Opening Night hangover had worn off, contributing to a sense of calm around the park. Our tickets put us in the MVP Loge, a strategic decision made months before expressly to avoid the lowest common denominator fanatics often found in the cheaper seats. Let me tell you, a little sense of security is well worth the extra bucks — even if it is a false one.

When Brandon Belt got himself into the homer column with the easy swing of a 10-year pro, it was the first chance we'd had to test out our lungs since we'd come to the City of Smog. It was also our first chance to test the waters of the post-beating Doyer faithful. As I suspected, they were still — on the whole — more bark than bite. This was especially true when their team was losing. Belt's jack made me rethink a decision I'd made earlier in the day never to return to this den of pricks and assholes. It also made me lose my voice. (I'm still searching for it.) 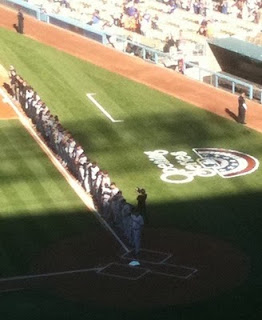 I've begun to notice that Chavez Ravine is most dangerous for Giants fans when the Doyers win. This would seem to be an oxymoron, but the Los Angeles fan, mind you, is a fickle creature. Only winners are tolerated. Win in Los Angeles, and you're King of the World. Lose, and you're Jonathon Broxton. So when the Doyers are winning, they manage to hold the crowd's attention and prevent a mass exodus in the seventh inning. Fans begin to do the wave. They buy more beer. Adrenalin pulses through their veins, and they look for a reason to use it. When the Doyers are losing, their fans simply vacate the premises and go about their regular affairs, the events on the field easily forgotten.

So it would be nice if the Giants found it in their hearts to occasionally win when I'm in the stadium. I'm working on a six-game losing streak at Chavez Ravine, and each loss seems to be more painful than the last. This time around, we were done in by our D — first the arms, then the gloves. It ruined two mighty fine pitching performances and made our ride back to the Bay a very quiet one. One laugher later, it was back to the Benny Hill revue, and suddenly the honeymoon is over.

My brethren are taking to Twitter and the blogs with reactionary Chicken Little diatribes pronouncing the 2011 Giants DOA. They're calling for the heads of Huff and Tejada. Aaron Rowand gets docked for hitting a home run on a hittable pitch. Barry Zito gets dinged for being Barry Zito. Basically, a whole bunch of irrational bullshit. And you know what? I was just as pissed and just as sick to my stomach as the rest of you. But I tried to remember that I'm a Giants fan, and I'm not going to fall into the trap of Red Sox Nation, finally fulfilled yet never satisfied. We're getting our rings next week, and after that, everything is gravy...

But for Bryan Stow, it will be a very cold week in a very dark place. There's no way of knowing if he'll ever get to smell the grass at McCovey Cove again. And it's not likely they'll find the perpetrators who put him inches from death — not if the Doyers can help it, anyway. But I'm gonna think of Bryan every time I want to bitch about Zito's contract or Rowand's inability to hit a slider that actually slides. I'm going to remember that it's just a game, and there are more important things in life.