Where the sun don't shine. 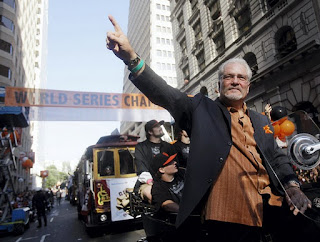 Before I start, a quick reminder that it's easier for me to squeeze in a tweet than squeeze out a blog. So if you'd like more than intermittent updates, I advise you to visit me @ButchHusky.

According to Baggs' Friday night missive, Brian Sabean has successfully brought his team in at the $130M payroll ceiling established by the Super PAC that pulls the strings at 24 Willie Mays Plaza. The coup de grace will be the contract currently being forged with a two-time Cy Young winner with wavy hair, a funky windup, and the heart of a champion.

It's no small feat, but I doubt we'll be hearing much about the front office's uncanny ability to work an abacus over the din caused by so many millions of dollars going to someone so young. If Sabean's minions merit a mention, it will most likely be to deride their choice to avoid a gratuitous contract for a power hitter who would quickly sour of AT&T's spacious confines in favor of investing in the proven horses who won us one World Series and could easily win us another.

I have a quick news flash for you: Dropping $200 million on this or any squad does not automatically translate into championships, especially in a sport where success is determined as much by luck and intellect as revenue and expenditures. Over the past 12 seasons, the Yankees have spent more money than Mitt Romney has is all his Cayman Island bank accounts, and they've won a grand total of 1 title.

The Giants have spent great gobs of money as well over that time, and they've won just as many rings as the Yanks. And the Giants have raised ticket prices every year, just like the Yankees and virtually every other team in the league, win or lose. But because the Giants aren't paying a luxury tax, I'm supposed to get irate and come on this blog and bitch and moan as if it would do any good. It wouldn't, and it wouldn't make me feel any better, either.

Now, don't get me wrong. I'm not trying to say we have to suck it up and accept that we're paying more this year for pretty much the same product as last year, aside from a few tweaks and a few less injuries. If we're really sick of these heartless millionaires who saved us from rooting for the Tampa Bay Giants and theit paltry $130M payroll — and $20M mortgage on the most beautiful park in the game – there's a very simple solution. We could call up our reps and return our season tickets...

Yeah, that's what I thought. So, what do we do? The shamelessly addicted. Stuck to our seats no matter how bad it gets because we have nowhere else to go.

Well, first, it would be a good idea to think rationally. Look at our ballpark. The place practically cries out for power pitching, gap-to-gap hitting, and speed on the basepaths. Granted, the current team only has two of those elements (and one is debatable), but savvy drafting and quality player development has yielded Buster Posey and Pablo Sandoval, and a flock of young studs are soon to follow, kids who can rake balls out to Archway #8 and run until the cows come home.

If they can manage to hold onto this pitching staff for a few years more, there will be plenty of bunting on the shores of McCovey Cove – and I'm not talking about the sacrifice variety. And maybe, just maybe, we might get ourselves another ring. We just have to get to October. The game takes it from there.
Posted by Butch Husky at 11:16 PM