The Definition of Gaint

Earlier this year, Garrett (aka @roheblius) tried to re-start our #SFGiantsHeatCheck blog by asking each of us a prediction-type question related to the 2014 squad. Because my fellow bloggers ran into life challenges, I was the only one to respond. I'm posting my thoughts here because: a. the Heat Check blog will likely never materialize; and b. I was freaking right.

Which one player is going to define the season for the Giants? 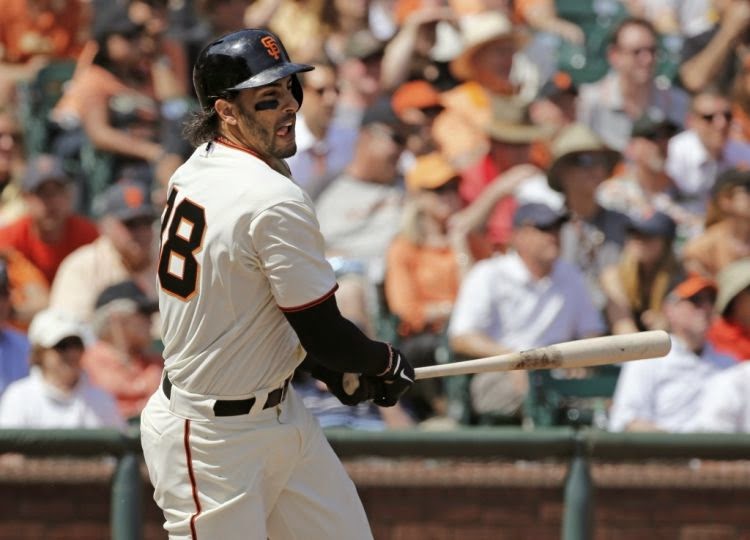 If I'd been asked this question prior to the season's first pitch, I would've given the same answer I'll give now: Mike Morris. Or Michael Morse. Frankly, I'm still trying to figure this out, and Kuip's onrushing senility isn't helping. (Paul Maholm, anyone?)

There were only two significant changes to the team that backed up their second World Series ring in three years by throwing up an absolute dud of a 2013 season that peaked in late May on an inside the park home run: Tim Hudson was added to provide depth in a weakened starting rotation with several lingering question marks; and Morse was brought in to hit more than five home runs while playing a mediocre-to-watchable left field.

So far, so good. Hudson looks like the staff ace, and Morse has shown a power stroke and penchant for the so-called "clutch" hit while not yet embarrassing himself with the glove. Meanwhile, the rest of the carryover roster has been inconsistent at best — Brandon Belt's early home run barrage and Angel Pagan's scalding hot start notwithstanding.

But while I think Hudson's steady, steely-eyed consistency will help to stabilize the pitching staff over the long haul, it's the fire in Morse's deeply stoned-looking eyes that leads me to believe he can be this year's Brian Wilson/Juan Uribe/Hunter Pence slightly deranged clubhouse glue guy.

Morse just doesn't fit the straight-laced, southern aristocrat mold of a Gerald Dempsey "Buster" Posey, the current face of the franchise. He's a goon, a goofball, a guy who takes his practice chops in the on deck circle like a lumberjack winding up to take down an oak, who can get the crowd to sign along with A-ha! as he struts to the plate, who does dances of jubilation after two-out, two-run ground balls up the middle. In short, he's exactly what this team needs to find their mojo.