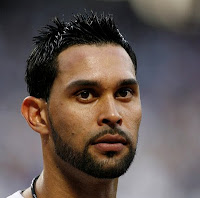 The Giants weren't bringing back Andres the Giant — much as we'll miss him. They would like to have kept Ramirez, but as has been noted in many other places on the interwebs, they're pretty deep as far as right-handed relief. And Angel Pagan fills a genuine need. Again, nothing to poop your pants over, but another solid move in an offseason where Brian Sabean has had to get creative. With the Care Baer in charge, it's back to brass tacks. The hangover is, well, over.


Further evidence of that is the dismissal of The Boss without so much as an offer. A year ago, basking in the afterglow of 11/1/10, Neuk-led management was more than eager to bring back the whole damn squad, save for Renteria and Uribe, who simply asked for too much. Giving Ross $6M when he'd never spent a season as a full-time starter was mild lunacy, but they only gave him one year, so it was a relatively safe deal. Cutting him loose now is admitting the mistake, but sometimes you have to lose face to win games.

So we return to building around strengths on a budget instead of building a well-rounded club with a few strings attached. Since it's not my money, I can't really complain — though I'm about to cut another $3,000 check for season tickets. (Thanks for the 5% increase, guys! Great offense last year!) Okay, so maybe I can complain, but a lot of good it's gonna do me. Sure, it's cathartic for a minute or two, but when you do it as much as some of my tweeps, it starts to sound like you have nothing positive to say.

The silver lining in this nuanced offseason is the versatility Bochy has to mix and match and play to win each and every day. We learned all too well in 2010 that #TheBrain ain't too skittish when it comes to making changes, and we're gonna see a whole lot of 'em with the depth they're fixin' to have in 2012: double switches, defensive replacements, pinch runners, pinch hitters, four relievers an inning, anything to heighten the odds that they're going to close out more of those 3-2 and 4-3 games.

I know it can be a little tedious. Trust me, I've been that guy shouting from the stands at Bochy to stay put and let these pitchers hang themselves. But he's just not that kinda guy. The same way Sabean's not the kinda guy to go all-in on a rookie prospect when he can get a decent veteran on the cheap. The same way Larry Baer's not the kinda guy to wear jeans. There's a saying we all hate, but I think it's appropriate here: "It is what it is."

Yet even amidst the ennui, there's the glimmer of hope. Brandon Crawford is getting the reins at short. How long before a squalid offense necessitates swapping in Fontenot is anybody's guess. But it's a step in the right direction. The Other Brandon will get his shot, too. That's the beauty of a deep and versatile team. It's like Little League. Only here, if you get your shot, and you don't produce, you sit. And I love the simplicity of that.

I'm not saying we have no right to bitch about the state or course of our team. In my humble opinion, anyone who buys a ticket is a junior partner. I'm saying there ain't much point. Unless you want to #occupywilliemaysplaza. Although it's a thought I've had myself lately. We could do it...

But instead, we'll buy the ticket and take the ride and buy some garlic fries and half-pound kielbasas along the way. Because that's what we do. We're junkies for the game. And we'll keep coming back for our fix no matter how much it costs or how good it feels. Because it's something we need to survive. It's a sad state of affairs being a sports fan. But sometimes it's better than thinking about what's going on in the real world.

Before I go, I'd like to join the chorus and give a shout out to Grant at McCovey Chronicles for this brilliant adieu to Andres Torres. Check it out when you have a minute.
Posted by Butch Husky at 12:01 PM