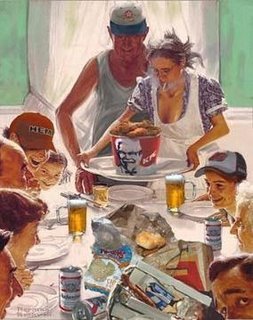 As I've said before, the hardest part of being a part-time blogger is keeping on a schedule, especially if you spread your passion across a wide swath of industries, hobbies, and pastimes. Which I do. But that's really another way of saying I'm lazy. I have no problem admitting that sometimes baseball is the furthest thing from my mind, and sometimes I don't feel like I have anything to add to the conversation.

So if you're looking for a daily dish, go to the big boys like MCC or BASG. Me, I don't really do this for page views. You won't see any Google ads on this Google site. I come here to vent, to let loose, to get a healthy dose of catharsis. If somebody actually reads what I write and likes what they read, that's just the all-natural whipped cream on top of my gelato.

With that disclaimer out of the way, let's dig into some recent news and notes before we dig into our turducken... 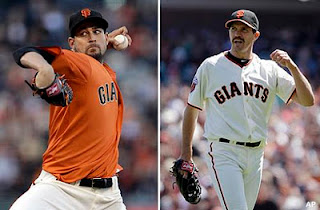 Back in July, I finally came around to what a lot of you have been saying for a while now: Jonathan Sanchez had to go. The time had come, and I knew it to be true. While I still love watching him deal when he's on his game, sadly, those moments had become few and far between.

The man looked lost out there. Not Zito lost, like he's thinking about his next open mic gig. More like totally, completely, absutively out of his head. Not even near the building. They must have taken my marbles away...

If there were ever an ideal circumstance to which we could safely apply the phrase "A change of scenery will do him good," it's this one. Who knows? Maybe Dirty will master his inner demons in the Great Midwest. It was fairly obvious he wasn't going to do it by the Bay.

But hey, not a total loss. The Giants still have a former Cy Young winner to slot into the No. 5 starter role. (Ahem.) And instead of letting Sanchez walk, Sabean managed to get a very usable piece that fills a couple needs on the roster. Whether or not 2011 was an outlier or a sign of things to come for Melky Cabrera, it's not like this team could get any less out of the centerfield position than they did this year.

As always, this trade should be judged more by how it plays out than a series of numbers on paper. Of course, a sizable contingent of he Twitterati would disagree. But to you I say maybe, just maybe this Sandoval-esque slacker has found his form just in time to spend the prime years of his career at 24 Willie Mays Plaza.

I can already hear my phone buzzing with push notifications of @ replies. 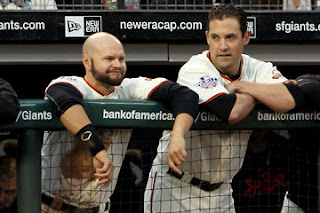 It came across the wire last night — and by "wire", of course, I mean the Twitter thing — that the G-Men declined to offer arbitration to Cody Ross and Pat Burrell. Most of us have had some time to adjust to the idea of a Giants team without Pat the Bat and his various... escapades. His retirement has been all but inevitable since he hit the DL over the summer with a severely stubbed toe.

As a former Bellarmine classmate of Burrell's, I find myself reflecting fondly on Pat's tenure in Orange and Black. Despite his antics and his 0-fer-the-World-Series, I loved watching this dude rediscover his love of the game, if only for a few fleeting months in the Summer of 2010. And there is nothing on this Earth that could ever compare to the thrill of his winning jack off Jonathan Broxton and the Doyers in that 2-1 classic.

While Ol' #9 will be spending his Spring cruising the Marina for cheap sex, Cody Ross will be plying his baseballin' trade for another team... Or not. I mean, c'mon, this is still the Giants, Brian Sabean is still Brian Sabean, and Cody Ross fits their usual MO — nearly 31, somewhat talented, somewhat useful, had one month of absolute brilliance surrounded by a career of mediocrity.

They could re-sign him, but like everything else about this offense, it's all going to come down to Beltran. If his move away from Scott "Lestat" Boras makes the guy more signable, you can bet the Giants will more than kick the tires.

If they land Beltran, Ross is the odd man out in a logjam outfield that already includes Melky, Nate, and more than likely Brandon Belt. (That and there probably wouldn't be any cash left to sign him.) But hey, the guy never has to buy his own drinks in the Bay Area again, and we got this cool banner.

3. God, Save Us From Willie Bloomquist 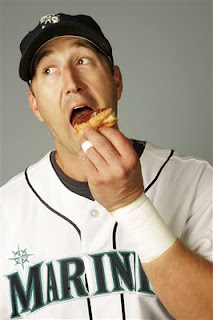 I'm already on the record as a Brandon Crawford supporter. Call me old fashioned, but I don't give a mess how much offense you get out of your shortstop as long as he holds it down with the glove, knows how to bunt, steals a base when he draws the occasional walk, and once in a while runs into one and drives a 2 RBI double to the gap.

If that's what the Giants can afford to have at short in 2012, then Professor Stamos is their man. But as has been pointed out by many, if they don't have the offense from traditional spots like first base ("Paging Aubrey Huff, Aubrey Huff you have a thong waiting for you at the front desk..."), they need to make at least minor upgrades at every position they can, and that includes the middle infield.

The need is exacerbated by the tenuous health of Freddy Sanchez. It would be too obvious to point out that Franchez had a fairly clean bill of health before making that now infamous clubhouse-to-clubhouse walk in the Summer of '09 — but I'll gladly do it anyway. Not only do the Giants have no idea what kind of offense to expect from a still blossoming shortstop prospect, they have a gimpy second bagger.

Thus spawned the Quest for Willie Bloomquist. I don't like it any more than you do, but look at it this way: Kevin Towers ain't that bad a judge of talent, and he let Sabean bid him into what is probably a bad contract for the D-Bags. Reminds me of last year's Hunt for Juan Uribe. The bankrupt Doyers will be kicking themselves for that one for years (two more, in fact!).

In the end, is it good the Giants didn't win that battle? Yes. But the war is still on, and whether it's Clint "Don't Call Me Brad Hawpe" Barmes or Jerry "Gil Scott Hairston" Junior (the Third), I don't see the Giants handing the keys to the Camaro to @BCraw35 just yet. So get ready for the inevitable utility infielder signing. Coming to a press release near you sometime in December...

Back in June, I opined on the particulars of potential MLB realignment. While I chose to examine the notion of returning to an alignment of two open leagues and five-team playoffs in each league, most of the details that leaked to Buster Olney at the time ended up in the final agreement.

Though it's imperfect and highly dependent upon responsible scheduling, the adopted plan has the potential to yield a more balanced playing field for all teams The expanded playoff structure places even more importance on winning your division while ensuring that more markets will have a team in the hunt for a playoff spot deep into the Dog Days. This can only be good for league revenue, ensuring the long term health of the business of baseball.

That said, I can sympathize with Astros fans. While their team hasn't been relegated to a lower division or exiled to the other side of the Earth, any National League purist would say they may as well have been. It's difficult to quantify in words the distaste I have for the designated hitter and the degradation it causes to the strategizing that's part of what makes baseball so damned enjoyable. But it's significant.

Were the Giants in the same position, I'd be outraged. But they're not, so for me, this is more like an interesting anthropological study. And it's pissing off people in Texas, which is their penance for electing Rick Perry three times, I guess. 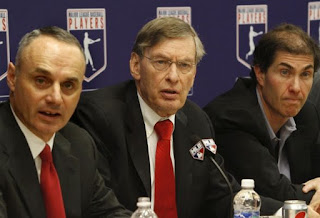 This blog has already gone way too long for me to waste any more of your time breaking down the particulars of the new MLB Collective Bargaining Agreement. You can learn all about it at any number of reputable (and dis-reputable) sports news services. Just Google "MLB, CBA, 2011".

I will offer these (very) brief thoughts:
——

That's it for now, folks. Tune in for my next installment, when I examine why orange panda hats are a necessary eye sore.

Happy Thanksgiving, and Go Niners!
Posted by Butch Husky at 9:01 AM