You're a good man, Charlie Manuel. 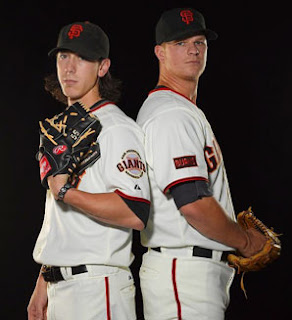 I'm choosing to ignore recent baseball-related events in Cincinnati. I will expunge them from my brain before I incur any collateral damage. I shall wipe the slate clean and look upon tomorrow as another day. Instead of wallowing in pointless abandon over this horrendous lost weekend, I will roll with the post I've been aiming to write since Thursday night...
This has to do with that little series in Philadelphia and a certain manager's comments afterwards regarding the relative merits and demerits of two young starting pitchers. To provide a frame of reference for the following diatribe, please allow me to introduce you to the studly dudes in that picture there:


Giants fans know these two righthanders as the core of the most resolute starting rotation in the Show. They're the Freak and the Horse, the Merry Prankster and the Country Gentleman, and most often Good Cop and Bad Cop. The national sports media began to catch on once the Orange and Black hoisted the Commissioner's Trophy last year. And now we're hearing words like "blueprint" and "Giants" tossed about in the same sentence by baseball folk and clueless bloggers like this guy.
As was duly-noted by a hashtag that made the rounds late into the night after los Gigantes wrapped up a series win at "The Bank" on Thursday, Charlie Manuel is not a believer. Or at least that's what he says. Well I'm here to tell you Butch is not a believer in Charlie Manuel. This guy knows damn well how "great" the Giants dual aces really are. He knows it because they're at their greatest when they're pitching against his team.
I agree with the take that Manuel's trying to keep his team's eyes on the prize and off the endless string of 0's they keep throwing up against Lincecum and Cain. He's playing the role of a good manager and falling on the sword of public ridicule to protect his team from facing even more questions as to why they can't figure out the Little Team That Could.

But it's obvious to anyone watching the games that Lincecum and Cain are in their heads, particularly the two-headed monster of Chase Utley and Ryan Howard. (Not to mention the entire Giants bullpen, which is setting a well-documented gold standard since the All-Star Break.) Good, great, superb, or mediocre, the Giants staff has the psychological edge, and that's a concern when you look at how the National League is stacking up and think about an NLCS rematch.
So Manuel popped off, Timmy popped back, and the Twitterverse exploded with creativity. And in the end, Manuel looked a little silly, the Phillies swept the Pirates, the Giants were swept by the Reds, and all was right again in the baseball universe. But I don't want everybody to miss the larger point: We still can't get no respect!


More shocking to me than what Manuel said is that the national media didn't jump down his throat as they would have if Bruce Bochy had used the same words to diss the Philly rotation. Instead, they threw up fancy graphics to prove that Halladay and Cliff Lee are far superior to Lincecum and Cain because of their long track records of success.

And then there's that pesky stat of World Series rings. Lincecum and Cain each have one. Halladay and Lee? Not so much. And they went a combined 1-3 against the Giants in the postseason.

But who cares, right? Who wants to be the top dog, the household name, the team in everybody's crosshairs? As much as it gets my boxers in a bunch, as much as I want to beat Karl Ravech in a dimly-lit parking lot every time he opens his mouth, as much as I want ESPN to wake up and launch a Bay Area website, I can't get upset about being the underdog. After all, it worked out pretty well last year. Right?
——
BTW...
Oh, and before I forget, if you want to see the Giants' horses in action, they'll be dealing against the D-Backs the next two nights at the Cove. Now that 'Zona's pulled within 2 games, this series is shaping up to be quite the benchmark for both teams. The D-Backs need to prove they're for real. The Giants need to put a stranglehold on the N.L. West heading into the dog days. Good thing we've got the top of the rotation lined up to face our resurgent division rivals. Let's hope the bats aren't looking past Ian Kennedy and his mates to the four-game rematch with the Phillies.
After Timmy's bout with food poisoning, the rotation is all effed up, with Cain leading off followed by Timmy, Vogelsong, and the two lefties. But they're gonna have to make due through the homestand without an off day to shuffle things up. And in case you haven't been paying attention, it's pretty clear that Jonathan Sanchez is coming back to replace the epically ineffective Barry Zito on Friday against his good buddy Chase Utley and the Fightin's. At this point, I really don't know what to do with the Other Barry, but I'm sure Brian Sabean and Bruce Bochy will put their enormous heads together and figure something out...
... Ah, the non-waiver trade deadline, or, as Mat Latos calls it, the "mercenary acquisition deadline". In the long-forgotten netherworld that existed before Twitter came into our lives, it was a hectic time, full of conflicting stories and unsubstantiated rumor, with players to-be-named and cash considerations changing hands like money at a craps table. It remains all of those things in our über-connected online wasteland, but the 24-second news cycle has put the whole process in a blender and mixed it with healthy amounts of the cream and the clear.

It's hard not to get caught up in the tornado of tweets to the point that you become the most unproductive cog in the history of American commerce. You refresh your feed the way you used to refresh the ESPN Baseball home page. You start to sweat even though the A/C's blasting. You obsessively search Baseball-Reference.com for the stats of minor league prospects you'd never heard of until they were mentioned by Jayson Stark in a tweet about a potential deal involving your team. And when the dust clears, all you want to do is drink.

We won't know for months whether Carlos Beltran, Jeff Keppinger, and Orlando Cabrera will make the difference between one-and-done and an epic repeat. But we can't say the moves don't make sense. Sabean upgraded the everyday lineup at three positions after losing two key offensive threats to injury and another to thong withdrawal. And we can't say the Giants stood pat when they had a chance to go for the glory. At long last, the front office recognized what "winning now" really means. This is a roll of the dice. If it comes up snake eyes, we've still got one ring. If it comes up 7...

I love a good Twitter war as much if not more than the next guy, especially when it involves my good buddy Marty Lurie. Marty has some ideas, and boy does he like to talk about them on the Twitter thing. One of his latest conclusions is that the Giants are "not a good road team". That's the San Francisco Giants. A team that just took two of three from the mighty Phillies in their hometown bandbox. A team that boasts a .500 road record overall.

My dumfounded reaction was such that Andy Baggarly beat me to the only joke there was to make in such a situation. Not one to leave well enough alone, Marty asked Baggs to clarify his position, which Baggs did with an economy of words that would make Jack Dorsey proud. It sure as hell made me feel a little bit validated after countless arguments with friends over Marty's merits and demerits as a baseball mind.

Like Baggs, I came of age believing a team that wins two of three at home and goes .500 on the road goes to the playoffs 99 times out of 100. Indeed, that team would finish 94-68, more than good enough to win almost any division in any given year. And when that team reached the playoffs, they would need only continue their pattern of regular season success to win 11 out of 19 games and claim a World Series title. As I mentioned, the Giants are currently a .500 team on the road and a .640 team at home.

So let's avoid the pitfalls that preyed on my pal Marty and not read too much into the Cincy sweep. The front office made the right moves to shore up the offense, and the boys will be enjoying home cooking more often than not in August. The future is still bright by the Bay...


...
Every now and then, I go through my ticket stubs and tally stats for the games I've been lucky enough to attend. As a season ticket holder, I challenge myself to get to half the home games, and I'm on track to exceed that in 2011. Unfortunately, not a lot of road games on my docket this year, but vacations are hard to come by when you're trying to change the world.
Anyway, here are some interesting notes from my season with the Giants (so far):
Until next time. Stay classy, my friends.
Posted by Butch Husky at 9:01 AM